The process of closing a question is arguably rather hostile. Can we please find a better way?

Yes, I understand why questions are closed. I don't agree with many of the reasons for closing, but that's another issue. In any case, despite the somewhat-helpful information provided to the asker, being on the receiving end of the closing process is like being kicked in the stomach, especially when the asker has tried very hard to follow the rules.

There must be a better, more humane way of doing this.

For example, when a question is closed as off-topic, provide some possible alternatives. Point to another StackExchange site, or some other resource, that might be a better fit.

Provide some mechanism to dispute a question being closed. I've had at least one question closed where the stated reason just made no sense, but I had no recourse.

Whenever this happens, I'm slightly less likely to use or recommend Superuser in the future. And I'm sure I'm not the only person who feels that way. Keep in mind that I've contributed fairly substantially to the site in the past. The danger is that eventually you'll push away the people that you really need to keep around.

We need to balance between quality control and "user friendlyness". However there is essentially a need to close things that are clearly off topic and/or move them somewhere appropriate. Having too many questions that don't meet the scope of the site means its harder to find what they want.

I don't like it when people tell other people "ask the question on foobar.stackexchange". We have a migration system in place. If a question meets the scope and standards (that is to say, a poor quality question is less likely to be moved). We'd rather move questions than have them crosspost, assuming it isn't too old. I've also noticed that least on SO, people often suggest reasking on sites they don't know anything about. The right way to handle stuff like this is a custom flag (and custom flagging to say "hey mods, this belongs on foo.stackexchange" then commenting "Heya, this question isn't quite on topic here. I've flagged it for moving to foo.stackechange. A mod will likely decide and move it if needed" is super cool.

However, if you've asked a question that's off topic here and on topic there, you've clearly not read and understood through the help pages. This isn't really our fault

The one exception here is hardware recommendations - where we often point the user to chat, since we have a core of hardware enthusiasts there, who, while often disagreeing on the merits of green vs red, and resolution over refresh rate.

In addition to the mechanism that Michael Frank suggested, we've traditionally encouraged people to post on meta about such things. This gets eyes of moderators and core users who read the meta, and if you can make a good case for reopening, questions get reopened. We've also had people pop into the ask a superuser moderator to ask. In these case you need to be able to convince other users that its not off topic, and its happened quite a lot in the past.

At the end of the day though, your question may be a beautiful and unique snowflake, but its just like every other snowflake and its just a pile of snow in the end.

The “tree” you posted about.

Your question that was closed is pretty much off topic from the get go; screenshot at the bottom for those who can’t see closed questions:

I read the SANS Internet Storm Center blog, but while the information there is often useful, the RSS feed has some problems.

The rest of the question is on the same note. I believe I commented on this question when it was open and I stated that as a web developer who also does Linux systems administration, I can tell you that RSS feed management is a headache.

If a feed is badly managed it can result in malformed content. In many CMS setups there is a field for specific RSS data to avoid automated systems mangling content. But many times those fields are left empty by lazy content administrators and the systems—because it needs content—defaults to the next fallback which ends up in mangled content.

Which is a complicated way to say: Human sloth and laziness results in broken content. So you need to contact the site admins to see if they are aware of this issue and if they can fix it.

The problem of that specific “tree” in this “forest.”

That said—and I believe I said this in a comment that are now deleted—this kind of question is off topic here. How can anyone here help you fix a remote site’s RSS feeds? What exactly is the question? Yes, the RSS feed is broken and yes the website has created a broken RSS feed. And what else?

There’s nothing hostile about that question being closed… But I will say I am fairly confident about my leaving constructive comments on this specific question. So perhaps the larger issue is the way comments are typically wiped clean from closed question.

I can understand why since off-topic questions can often lead to a chatty comment area where people are trying to clarify or politely answer and that might seem like a pile of nonsense to a moderator, but maybe there should be better selective pruning of comments on bad questions to apply context?

But you also claim this:

Provide some mechanism to dispute a question being closed.

Yes you do. Look at that question again. In the list of options—next to “Share” and “Edit”—is a “Reopen” option. And that is a mechanism to reopen your question.

But as I said, there’s no way I can imagine that specific question being reshaped into a way where it would be reopened and stays open. 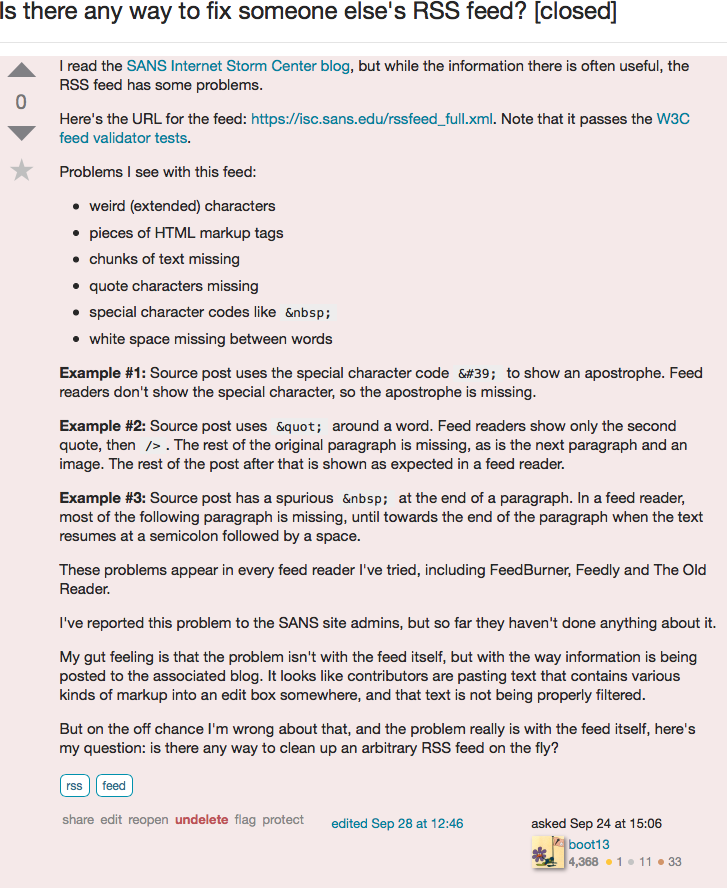 Not the answer you're looking for? Browse other questions tagged discussion closed-questions .

1
Quick way to find questions nominated for closing?
16
Can we please have better tag wiki excerpts?
5
Alternatives and the campfire lists are better in the tag wiki, within reason
7
Why do questions get closed?
3
Moratorium on Answers
10
Thoughts on Network Engineering migrating Qs to this stack?
6
Dealing with low-quality questions that end up on Hot Network Questions
0
When closing how to specify a new SE site?
18
A better way to find duplicates?