Kindly asking about explanation of moderating comments of an answer

There is a bit old question moved from Server Fault, with an answer commented unfavourable by moderators.

I'm not native English speaker and maybe I don't understand something sufficiently well...

As IMVHO this answer is perfectly valid* and don't seems to be edited, so when I saw this comments:

As I have learned this - ironically simple - solution really hard way and I kindly asking about explanation of this situation and a little clue about what can be done to solve this.

(*) If somebody is interested I will try confirm it meritoriously.

(**) I can't quote it because all my comments are deleted.

(***) That comments might be unnecessary but have been written only to show moderators**** possibility of this answer correctness.

question header, I have a hunch what will follows. As I have suspected I have saw The Issue. I also have saw - with a little regret - that jumar have responded already. Next I have noticed "moderation" comments and... 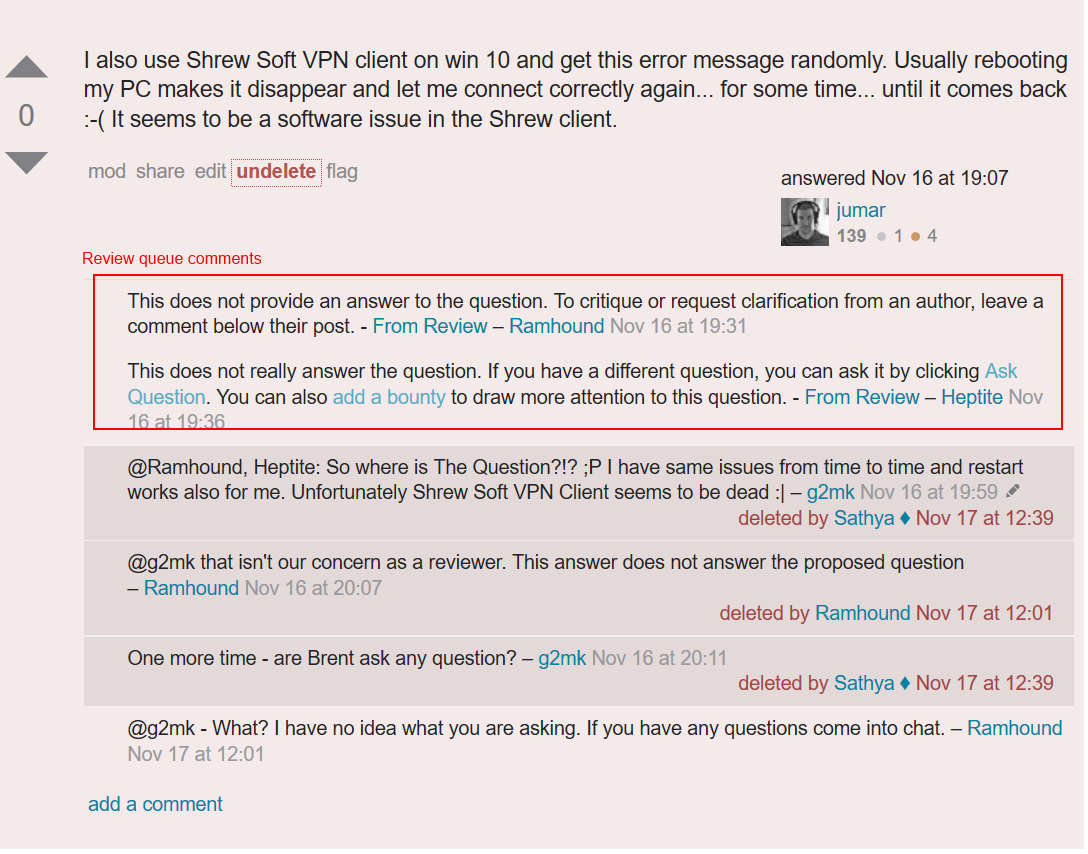 As I lost a lot of time because of this issue* I kindly asking for:

(*) To be perfectly clear here - by this issue I mean VPN client issue, not a SU issue.

Moderators wins. Congratulation guys and thank you for your help and time. Personally I regret a little that semantics win with information and I'm a little curios votes casting.

So I was one one the people who commented. I will explain my reasons for the reason I voted to delete your answer.

I also use Shrew Soft VPN client on win 10 and get this error message randomly.

Usually rebooting my PC makes it disappear and let me connect correctly again...

I read this sentence as an auditor one half of a two sentence comment to an answer. I put myself back in that position, with the same problem as before, and I am wondering what about the times it does not work.

for some time... until it comes back :-( It seems to be a software issue in the Shrew client.

I don't see this statement as being helpful. So the problem is the client, so what is the solution to the problem, rebooting doesn't solve the problem since it comes back after awhile.

If the true cause of the problem is not known then how can you submit the answer to the problem?

As I lost a lot of time because of this issue I kindly asking for:

What you submitted as an answer was a comment at best. You not being able to accept the quality of your answer, wasn't up to our standards, is your choice to make. The decision to delete our answer won't be reversed unless you provide significant details on a retail solution. Feel free to do that.

VPN client users, who deny a claim that reboot helps.

As been explained once before. Most of us who decided your answer was a comment, not an actual answer, are not moderators.

Most of the commentators arn't 'mods', they're doing this through the review queue.

So here's the process that happens. People post answers that may not attempt at resolving the question. Sometimes the users use the handy automated comment posting option to post a comment asking them to improve their answers.

The comments arn't perfect I suppose but close enough I guess (and this is why I prefer to write my own comments).

As for your comments, and why they were deleted

A good comment attempts to get further information to solve the problem, adds information that wouldn't quite deserve its own answer. Yours seem to be a misunderstanding of the comments and don't really add anything to the answer.

As you may have noticed, the answer is now deleted, which also happens.

Here is the deleted “answer” that was provided that you cannot see; screenshot as well below:

I also use Shrew Soft VPN client on win 10 and get this error message randomly. Usually rebooting my PC makes it disappear and let me connect correctly again... for some time... until it comes back :-( It seems to be a software issue in the Shrew client. 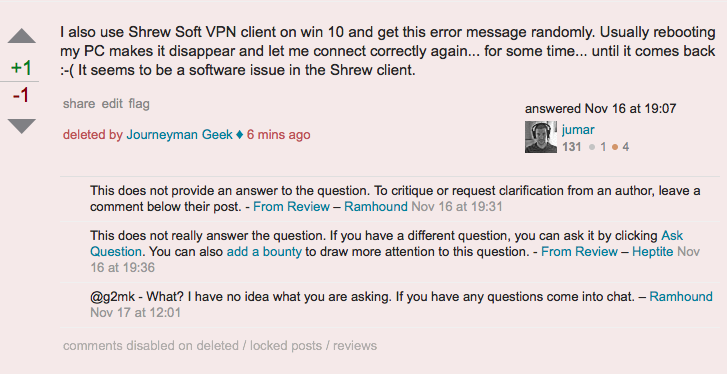 While rebooting your PC will clear up the issue, that itself is not an answer. Pretty much tons of issues on PCs can be solved by rebooting. So much so that is why this clip from the show “The I.T. Crowd” is so popular:

The reason that is a joke is because “rebooting” and “turning it off and on again” is a “fix” for many problems… But it also is not a “fix” at all.

In the case of client software like this, something else must be happening and a real fix is to find that issue and deal with it. If the only thing you can do is add a comment about rebooting, then leave that comment and don’t post it as an answer. Simple as that.

Also, not everyone here is a moderator. Many people you might consider to be a “mod” are just users who have voted to close or down vote a question/answer. While this answer was indeed closed by a moderator, chances are good someone who is not a mod will stubble across the answer, see it is not an answer, flag it for closing based on it not being an answer and if enough people vote on that and agree? The item is deleted.

You too could grow in rep here to earn such privileges so don’t think of this place as just some place where random mods go over content. That is not the purpose of this place. This is a community and you are a member of it and you should not worry about airing an opinion or acting on bad/good content.

11
Should answers encouraging to "restart" be flagged?

8
SU tagging conventions: [videocard] vs [graphics-card], general PC component tags
1
Why strangulate the DOS-discussion in the comments?
5
What can we do with [restart] and [reboot]?
16
"Answers" that are better off as comments
18
Where do you draw the line between a "stupid" question and an acceptable one?
11
New menu for comments with "common phrases or questions"
7
Is to clarify (not ask) about Accepting an Answer inappropriate in ALL cases?
2
How can this question about display adapters / protocols be made acceptable?
12
Why did my answer get deleted?