Did I create, then fail my own review audit?

I encountered this question in the Reopen queue. At the time, it looked like this. I suspected it might not be worthy of re-opening, so instead of using Edit and Reopen I opened the question in a separate window to investigate. It took me a bit to figure out what the OP was asking and re-word the post accordingly, so given my investment I saved my edit in the 2nd window. Returning to the question in Reopen queue, I cast a Reopen vote and was greeted by this: 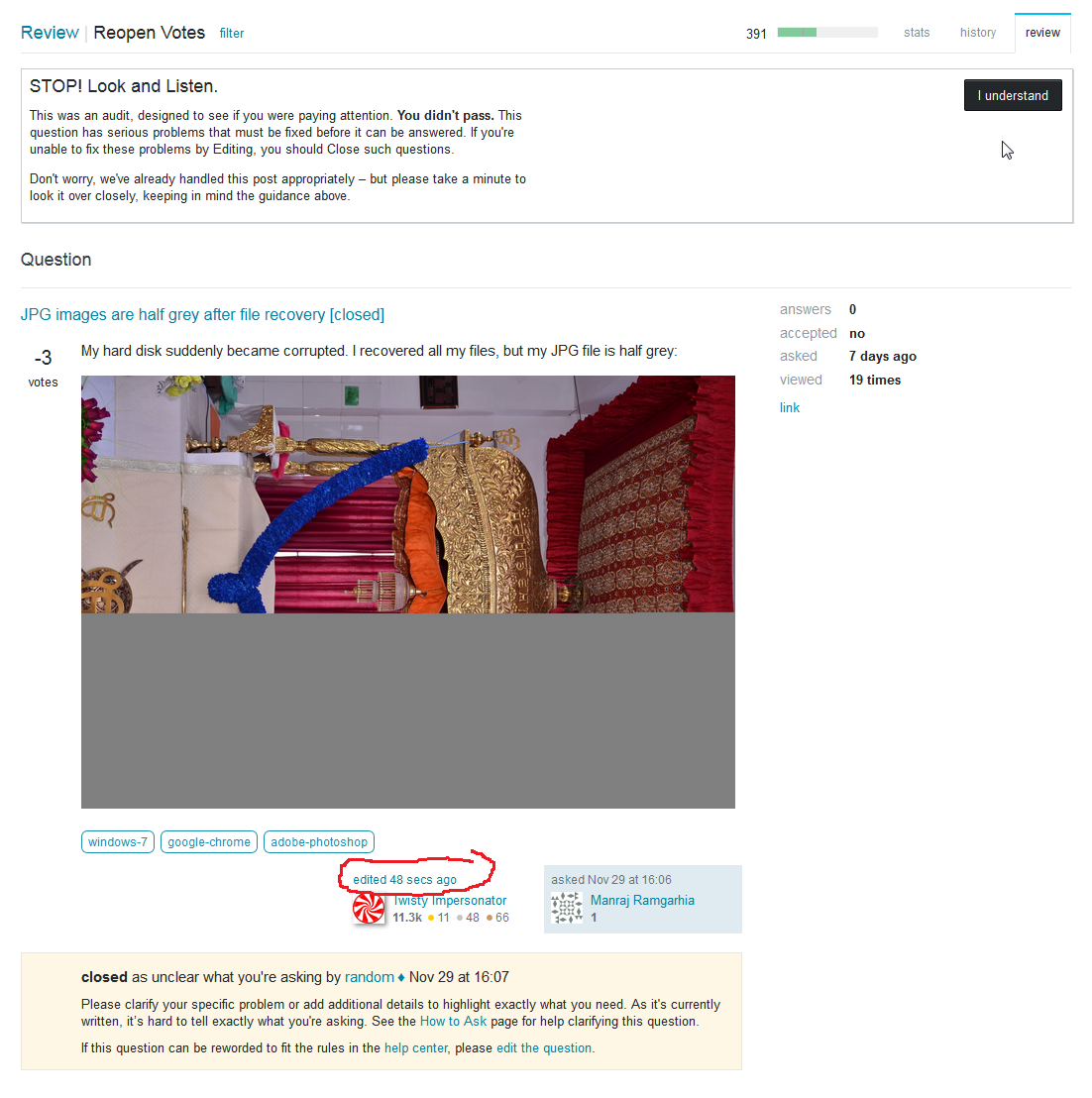 The explanatory text notes, "This question has serious problems that must be fixed before it can be answered". Since the post was Closed at this time, I assume this means the post needed to be edited before it could be Reopened. But the only one to who has ever edited it was me. Also notice the version of the question shown in the audit is my edited version, not what was in the queue before my edit.

Did editing the post outside the Reopen queue create an audit that I failed with my "Reopen without Edit" action?

Update: I just noticed my Reopen vote did not get cast. I guess that makes sense, but this kinda feels bug-ish because I really did intend a Reopen vote to be cast.

Questions can be pushed into the Reopen Votes queue either by an edit or a reopen vote. As you said, the only revisions were made by you after you saw the review item, so that couldn't have created the task. I see only one reopen vote on the question now, which I suspect is yours, again cast after you saw the item. Therefore, the question must have only been shown in the queue as an audit. Audits are audits at their creation; normal items cannot transform into audits mid-flight, nor can an audit stop being an audit. The system likely chose this question to test you because of its low score and closed status.

Had you used "Edit and Reopen" from the review page, I think you would have passed. The "correct" decision had already been decided when the audit was created, so your edit outside the task didn't change anything. This is unfortunate, but since you're clearly a conscientious reviewer, there's no need to worry about failing the occasional dubious audit.

7
Oops, I think I managed to dispute my own flag!

10
Should clicking the "Close" button in a review audit, where closing the question is not appropriate, cause an *immediate* failure of the audit?
3
Failed audit trying to report apparent bug in review queue
4
Please make this salvageable post not be an LQ review audit
6
Displayed answer not consistent with edit mode
2
Failing Review Audit because I added a comment that it was a duplicate post
0
Why did I fail this review audit?