So there is currently an argument about whether a question that involves mobile data usage on a computer is off-topic or not. I don't quite understand why that makes it a "mobile device" question (besides the exemption for "interfacing with a computer", my impression was that questions specifically had to be about mobile OSes such as Android in order to be offtopic).

(The question in question is https://superuser.com/questions/1439188/free-mobile-data-when-using-%C2%B5torrent.) The OP has since deleted the question, so this is it: 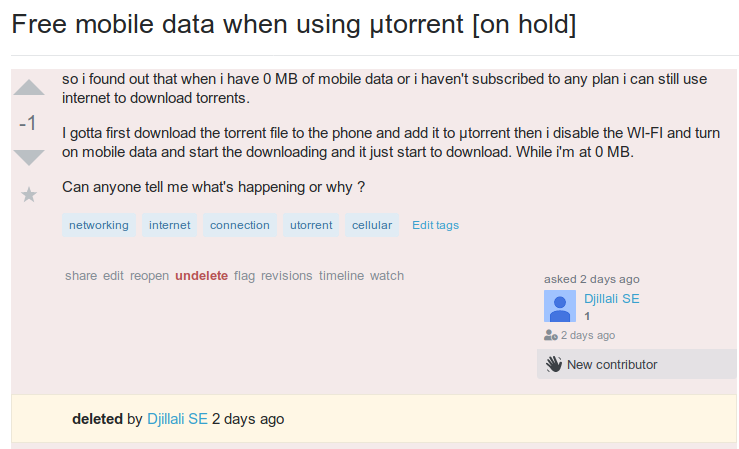 So I thought I'd ask for a clarification for this particular edge case (a question that's about a computer program and mobile internet connection)... using a list of hypothetical posts:

(I'm writing this while still half-asleep.)

Here #1 (and hopefully #2-#3) aren't offtopic, #7 is IMHO on the edge, while #8 is generally offtopic. What about the rest? In particular, would #4 and #5 be considered offtopic, and are they the same level of (not-)offtopic or do they get different rulings? (Although honestly I'd be even more confused if they got ranked differently – either they're both on-topic because PC, or both are off-topic because mobile data.)

I see the issue as whether the question is central to the computer, getting your work done on the computer, or using the computer to diagnose and solve a problem. If it also involves a network connection, it doesn't matter what type of connection it is, or what related hardware is providing it. So there's no reason why #3, 4, 5, or 6 would be off-topic.

I think the guidelines try to simplify things regarding a computer connected to a mobile device. Questions are often considered on-topic as long as a computer is merely part of the hardware complement. But I believe it should consider whether the computer is playing a substantive role.

Regarding the linked question, a computer isn't mentioned at all. uTorrent runs on a computer, but how does anyone know that there isn't a mobile version, and the question involves just a phone (and perhaps some network connection where the computer is incidental)? The question describes downloading the torrent file to the phone and doesn't mention moving anything anywhere else. People shouldn't need to investigate the mentioned products to determine what platforms they run on, to learn whether it is or isn't possible to run on specific hardware. If the role of the computer is clarified in that question, I would see it as on-topic. But as-written, the relevance of a computer isn't clear.

14
Close not computer related questions on StackOverflow instead of migrating them to SuperUser
11
Questions about WordPress on Super User
2
Questions about IP Phones: Off-topic?
3
Are questions about TVs off topic?
1
Would a question about switching to the mobile verison of Bing be acceptable?
6
Are mobile networking questions on topic for this site
3
What's the deal with Android and cloud computing?
3
Would this WhatsApp question be On Topic on SuperUser?
2
Is Super User a good place to ask this particular question about networking?