How can I stop repeated adverts of articles from somebody that admits he is a rubbish coder?

How can I stop repeated adverts of articles from somebody that admits he is a rubbish coder?

I saw this thing pop up: 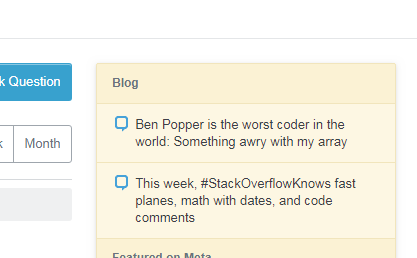 which is a bit tiring because it reminds me of another thing that popped up a while back.

Not unlike the title of another post he wrote, so this one reminded me I thought I'd seen this kind of rubbish before.

I'm tired of this I don't want this kind of thing on my screen.

How can I get rid of these blog article notices.

If it was from Joel or Jeff or that chuck norris c# guy then fine, but not spam from a beginner level programmer bragging about how rubbish they are. And I don't see why such a thing would be given such wide publicity. It's like an advert for himself, nobody would have heard of this ben popper guy otherwise. I gain nothing reading that kind of thing.

To Ramhound, they are a basic level programmer see here https://stackoverflow.blog/2020/02/13/ben-popper-is-the-worst-coder-in-the-world-something-awry-with-my-array/ he writes "I felt at least partly at home during the HTML and CSS lessons" and he writes of himself "I don’t have a clue what I’m building or why." and "the course shifts to functions, there is no explanation of how that might be related to arrays." He's literally just getting his head around arrays and functions. That isn't relevant to me or any experienced programmer.

How can I hide blog article notices?

One of the features is to "Hide the Community Bulletin module" which contains the blog article notices. Note this will also hide other Community Notices.

3
SU Review, how to stop "watching" a tag
5
Request to reopen 396626 (How do I stop this message?)
1
I've got a account in Superuser but I forgot email? Can I possible get it back?
3
Why is my comment locked from editing & how can I modify it?
6
I accidentally edited a question that is not mine, how can I delete it?
3
Can somebody of rank create a tag #albert for me?
4
How can I find and list the questions that I've previously asked on superuser?