This question was incorrectly closed as off-topic

This question is not off-topic. Specifically, it is a question that might be asked by a computer enthusiast, about

and it is not about

Additionally, it does not fall into the list of questions to avoid asking:

It is a practical, answerable question based on an actual problem. It is not chatty or open-ended. It is reasonably scoped. It is not a request for discussion. It is not a subjective question.

If questions with simple answers that can be found simply by Googling "traceroute" are not welcome on the site, then this should be made clear on the on-topic or off-topic pages. As it is, it is incorrect and unhelpful to new users to close a question like this one.

I did a bit of research before posting, and it is not clear to me what the correct course of action is here. There are posts on other sites about this, but I couldn't find anything directly addressing this for SU.

I suppose my ultimate question is: why was this question closed? which by its asking, obviously implies that the already provided answer (it is off-topic) is incorrect.

I've tagged this for support and discussion because I am concerned that this specific problem addresses a larger problem with SU and perhaps SE as a whole, and I want feedback both from moderators and from the community about how it should be addressed.

Why was this question closed?

There are a finite amount of close reasons, it's the system we have, and the close reason that would best describes the reason "too broad" no longer exists. Perhaps the moderator should have chosen, Needs more focus instead of saying it was asking for a learning recommendation, but it was still a low quality question in my opinion.

Here is a current screenshot of Multiple IP addresses on traceroute 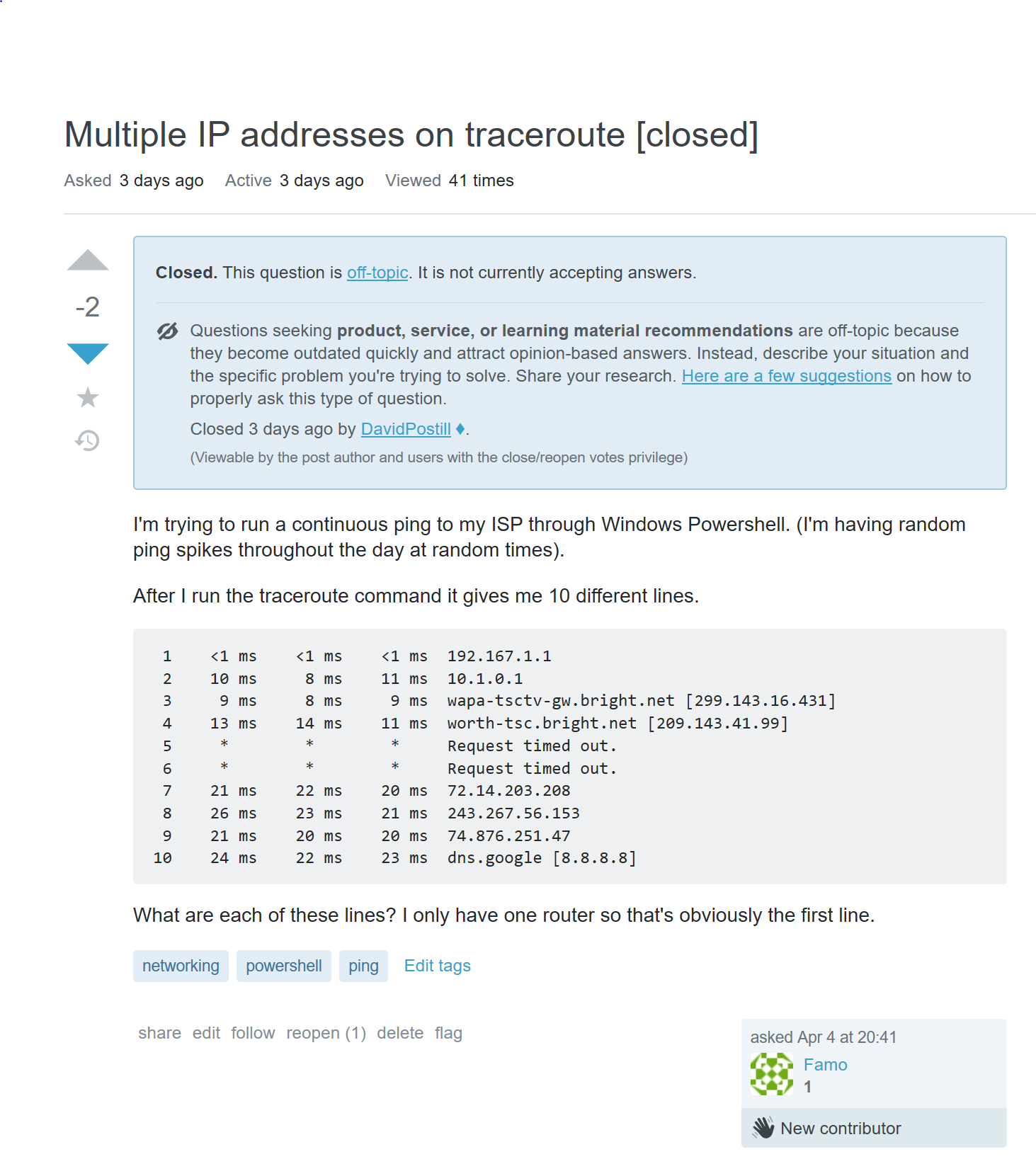 The author wants somebody to explain the results of a trackroute, it's not clear by their question, what part of that output they didn't understand. The author failed to provide any indication what their research they performed before they asked the question. To put it simply, while it's clear what they want explained, what they want is extremely broad in my opinion.

I said something similar in a more recent question about this particular question. I also indicated that at any point the author of the question, could improve their question, and it would be eligible to be reopened. In fact, if enough users thought it should be reopened without an edit, the community could override the closure of the question. I think it's important to point out, multiple users have indicated they disagree with the closure of that question, but not a single one of those users have actually voted to reopen the question.

which by its asking, obviously implies that the already provided answer (it is off-topic) is incorrect.

Multiple IP addresses on traceroute did not receive an answer before it was closed.

I've tagged this for support and discussion because I am concerned that this specific problem addresses a larger problem with SU and perhaps SE as a whole, and I want feedback both from moderators and from the community about how it should be addressed.

The question probably should have been closed as a duplicate instead of the current close reason. Given that it has received almost zero attention I am not sure if reopening it to close it with the correct reason would benefit anyone.

Why was this question closed?

What are each of these lines?

Explaining how tracert works and what is the meaning of its output is asking for "learning material" recommendations.

The OP also did not provide any evidence of having researched tracert.

From How do I ask a good question? - Help Center - Super User:

Have you thoroughly searched for an answer before asking your question? Sharing your research helps everyone. Tell us what you found and why it didn’t meet your needs. This demonstrates that you’ve taken the time to try to help yourself, it saves us from reiterating obvious answers, and above all, it helps you get a more specific and relevant answer!

If the OP had searched for "explain tracert output" he would have found on the first page of results the following links all of which answer his question.

Not the answer you're looking for? Browse other questions tagged discussion support .