I had two spam edits from the same user in a short interval: on this contribution and and this one (which I rolled back). Despite his reputation he (or she) seems to be a rather difficult user (I remember he has been blocked on at least one stackexchange site in the past and I had "bump ins" with him in the past as well). Is there a way to protect/block/etc. myself from such a user? If not what else should I do, what would be appropriate?

I have a daughter and she is special, she has autism, eventually, due to distraction, tiredness, my computer is logged in, due to a joke in her universe, she moves to imitate actions that she sees me doing.

When I notice it, I revise it, both votes and editing, sometimes I notice it on the spot, so the edit made by her doesn't even appear, due to the short reversal time.

Occurrences of up/down votes on my cell phone are more frequent, I change the password, even so, at some point, she finds out, and I get distracted typing when the digital fails.

One of the first events of my daughter's actions was the edition made on Jun 25 at 20:21 As reported to the OP where my daughter applied a down vote after taking my phone with the app open, an edit was made explaining and the downvote was removed.

Only this, there is no spam in these actions, however, I understand and take responsibility for her actions. 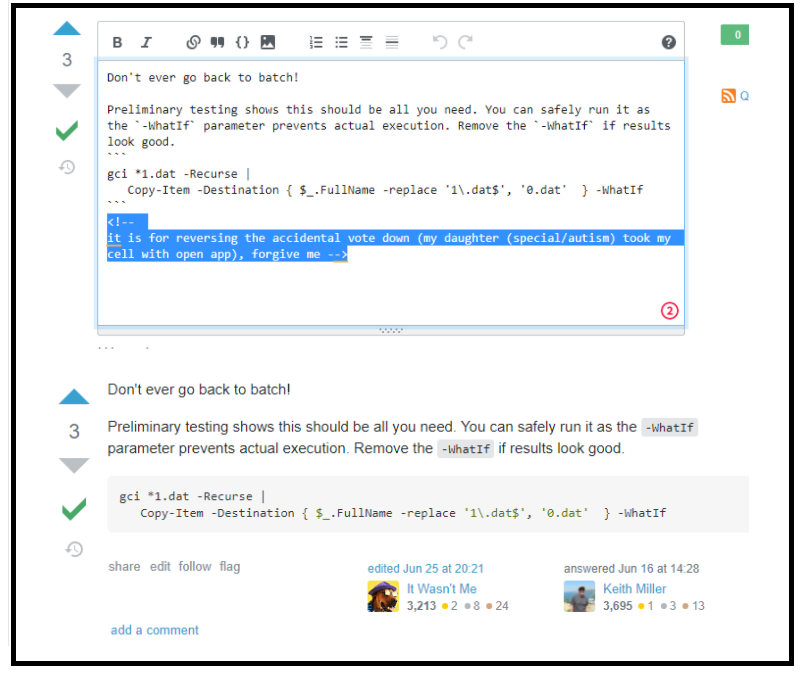 3
Possible spam user “myopic.bones”
19
Reason for flags declined?
3
A user keeps criticizing all my answers - some taughts about downvotes
1
Is there something off with how reputation is built on Stack Exchange?
3
I'm warned about the bad quality of my questions, yet I see no questions
5
Migrating high-quality, off-topic questions to another site in the Stack Exchange network
5
Suggested edits proposed by an anonymous user?