Why is this audit spam?

I just received this review audit in the Low Quality Posts queue. Here is a screenshot: 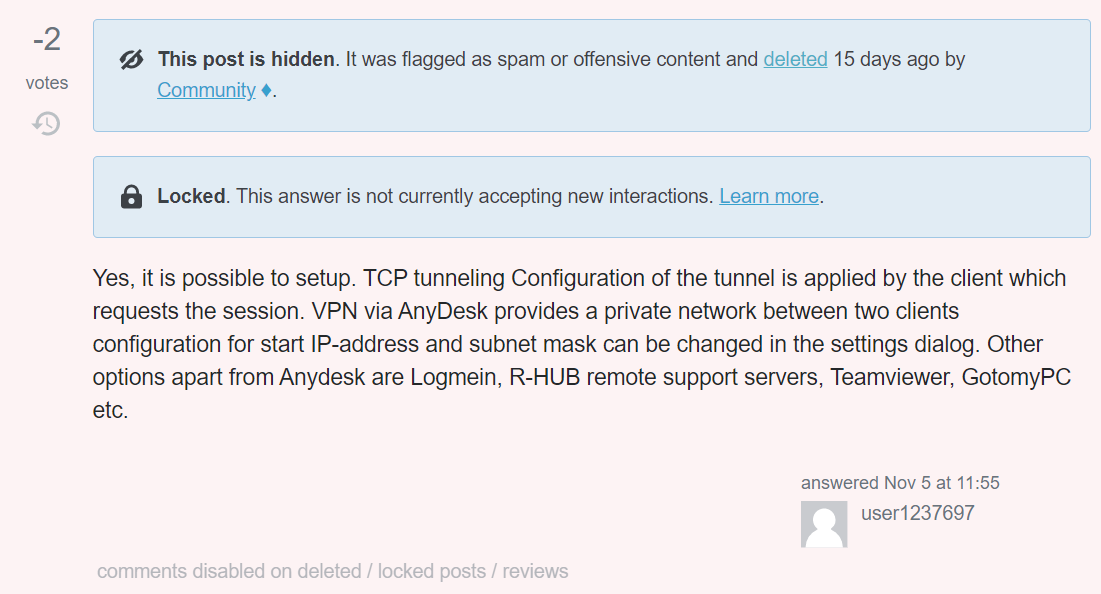 I passed the audit, but only because I noticed that the user who posted it was deleted, so I opened the post in a new tab to see if it was an audit. If the user wasn't deleted, I would probably have pressed Looks OK and failed.

I don't see why this is spam. At first I thought it was promoting AnyDesk, but that's clearly not the case since the question itself is about AnyDesk. Maybe the last sentence suggesting other options might be the part that's considered spam, but it suggests several other options and there are no links. If it were trying to promote one of those products, I would expect it to only mention the product it's promoting and link to it.

It also looks like an actual attempt to answer the question. The question asks "Is it possible to setup VPN through anydesk TCP Tunneling?" and the answer states "Yes, it is possible to setup". I don't know anything about the topic, so I can't tell whether or not this is a good answer, but even if it isn't wrong answers shouldn't be deleted. All that matters in the Low Quality Posts queue is if it's an attempt to answer the question, and this answer clearly is.

I'm sure this was marked as spam for a good reason, but even after staring at it for half an hour I can't figure out what that reason is, so I definitely wouldn't expect other reviewers to pass this audit (unless they like me notice that the user is deleted). So could this answer please be removed from review audits? And I would also be curious to know why it was deleted as spam.

This particular user (could be more than one, I suppose) keeps coming back and promoting the use of "R-HUB remote support servers" despite the moderators continuing to destroy their accounts. This trend spans across years.

Like Mast mentions, I'm not going to go into excessive details, but I will mention that the oldest post on Super User containing this type of spam has long since been deleted (10k+ link), and so has the user.

Should this type of spam be an audit? In my opinion, probably not. As you describe, it's relatively difficult to tell this is spam at first glance. You were paying attention enough to notice that the user had been deleted, though, so kudos!

0
Why was this First Post deleted even if it does not deserve deletion?
4
Please make this salvageable post not be an LQ review audit
6
"Our system has identified this post as possible spam" - Audit
8
How should I treat spam in the Low Quality Posts review queue
27
Strange audit result
0
Why did I fail this review audit?