Factual correction edits and comments being removed. What's going on?

I edited https://superuser.com/a/1652392/197867 for factual accuracy - specifically that motherboards are the limiting factor behind VT-d and AMD-Vi support nowadays, not processors.

As far as I can tell, the vast majority (if not all) modern Intel and AMD CPUs support VT-d/AMD-Vi, even on laptops and embedded chips.

I made edits (a, b) to reflect this, but it was either reverted or rejected by the author.
I also made comments instead to point out the inaccuracy (as it appears the author disagrees), but the comments have been mysteriously disappearing (among with a bunch of other comments pointing out inaccuracies in the post).

Your edits clearly were stepping on the original answer poster’s intent.

I cannot speak for the comment removal but your “factual correction” was really just a step over the line in my humble opinion.

“Remove mentions of Vulkan/DX12, since most modern games have DX11 fallbacks. All modern CPUs support VT-d/AMD-Vi, and it's only limited by motherboard support nowadays”

And here is a screenshot of the edit diff for context: 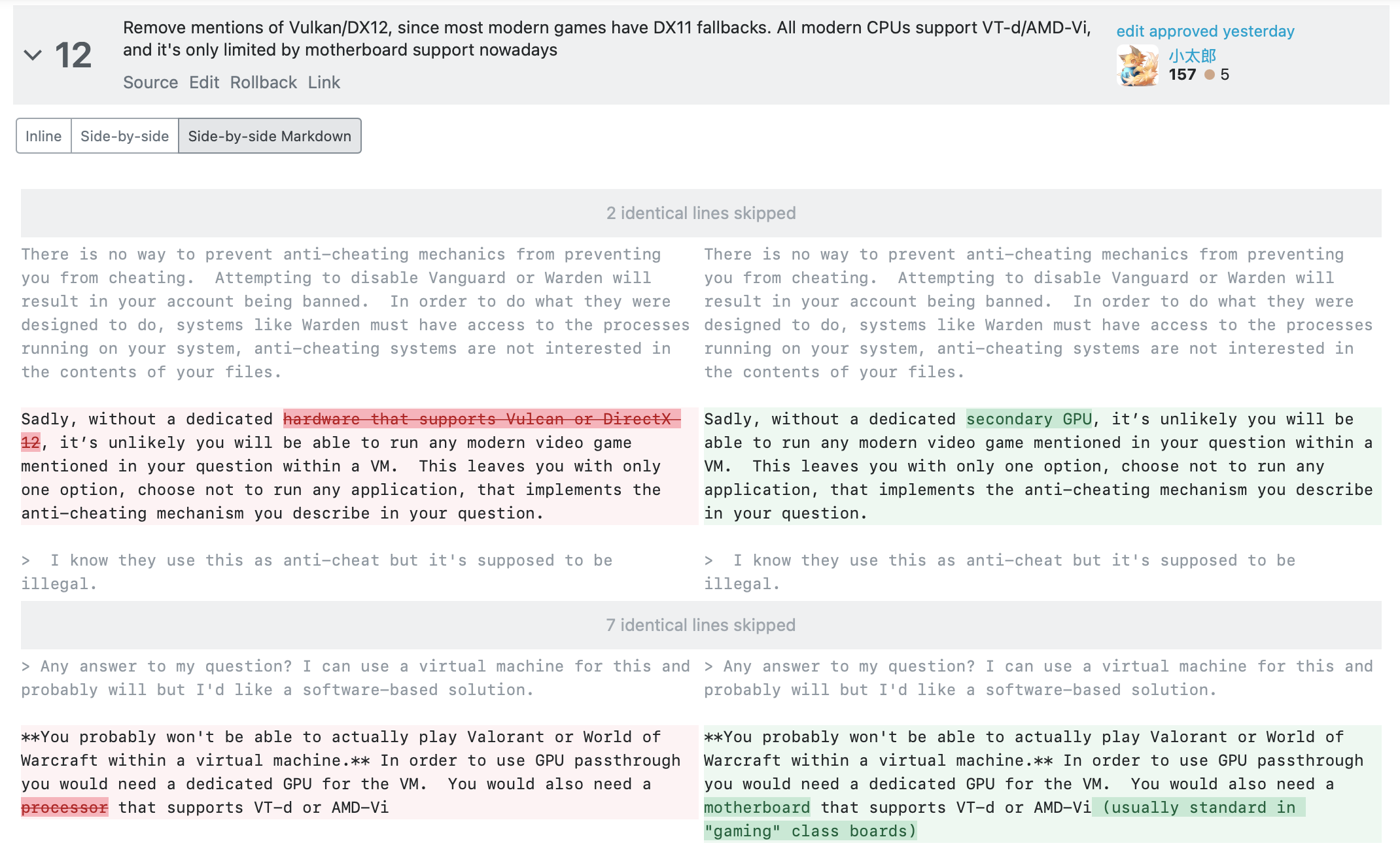 I am unaware if you stated as much in an actual comment prior to your edits, but effectively what you stated there was a comment. You disagreed with the content of the answer and believed the answer should be modified. That is a valid comment.

But to then cross a line and actually make edits to affect that point of view? Nope. You should simple let that comment stay as a comment and not say or do anything else.

If the original poster accepts that information, they might edit the question. If they don’t? You shouldn’t get into a fight about that.

Easy… You can solve the disagreement by posting your own answer that might make reference to the answer you feel is incorrect and share your own take on the issue. Or you can honestly just leave a comment, downvote the answer and walk away… Or just do nothing.

But to cross a content-owner line and force an edit like the one you did? Nope. That would have been rejected in an edit review and rolling back is the appropriate response by the original poster.

I edited https://superuser.com/a/1652392/197867 for factual accuracy - specifically that motherboards are the limiting factor behind VT-d and AMD-Vi support nowadays, not processors.

I ultimately disagree that it’s a factual statement that support for VT-d and AMD-Vi is ultimately up to the motherboard firmware. However, I agree it’s a factor that ultimately, determines if it’s supported. Which is something that I ultimately might add to my answer.

One of the comments the author made explicitly asked me to make the edit instead of commenting, which I was initially reluctant to do because of this reason: that it changed the answer too much

I read it and I disagree with the statement you made. The comment was flagged as unnecessary (since the author of the answer had read it) and since there had already been 46 comments submitted to the answer it was deleted by a moderator.

I made edits (a, b) to reflect this, but it was either reverted or rejected by the author.

I also made comments instead to point out the inaccuracy (as it appears the author disagrees), but the comments have been mysteriously disappearing (among with a bunch of other comments pointing out inaccuracies in the post).

A question that had no business whatsoever became a hot network question, then several users made inaccurate commentary that spanned dozens of comments, and after that happened the third time I just began to flag any comment that wasn’t explicitly feedback about the answer.

So “what’s going on” is that comment section is a discussion forum and a 46 comment long discussion about a topic is ridiculous and was stopped by the moderators.

I should have just asked for the answer to be frozen from the start, but that would have prevented my ability, to actually improve the answer after it stopped getting attention from users outside of Super User.

While certainly discontinued the list you provided, to conclude VT-d is supported by nearly all processors, is incomplete since my own processor doesn’t support it. It’s only been recently has it started to struggle with the largest AAA games and that is only due to the GPU in that particular system.

Which is the entire reason I will not accept any edit that says the processor supporting (VT-d or AMD-Vi) isn’t at least a factor.

5
What can moderators do and what's difference between 10k users and moderators?
0
Why do comments usually get removed from Questions?
7
Can moderators move and change comments?
8
User was removed and I get negative points?
3
Why do you regard a factual question about software as "outdated quickly and attract opinion-based answers"?
6
What's happening when I try a search on the number of comments?
2
How to get back to removed comments (particular case)?
3
Can a badge be removed after being awarded?