Is “We don't put + between key commands.” some official Stack Exchange policy?

While reviewing a suggested edit to an answer I posted, the person suggesting the edit stated “We don't put + between key commands.” and referred to this comment made by another user’s (Tetsujin) comments on another answer screenshot below for reference:

“No worries - btw, the styles used in the answer are 'accepted usage'. We don't put + between key commands.”

Huh? Really? I realize that each poster here might have their own personal style and their own idiosyncrasies when they post content here, but I have never seen this “We don't put + between key commands.” claim ever being made before.

Is this some kind of style policy I was unaware of?

For example, look at this page at Reed College for “Using Symbols and Diacritical Marks on macOS” and specifically the table of “Common character accents & symbols”; there are clearly + signs between keys.

I won’t begrudge an individual user having their own policy towards keycap formatting, but a claim like that seems a bit much to me.

Especially when I found this Meta Stack Exchange thread on keycap formatting where every example given clearly places a plus (+) sign between keycap characters.

And, as David Postill kindly points out in a comment, even the “Markdown Editing Help” page right here uses plus (+) signs in the keycap combo examples as well. 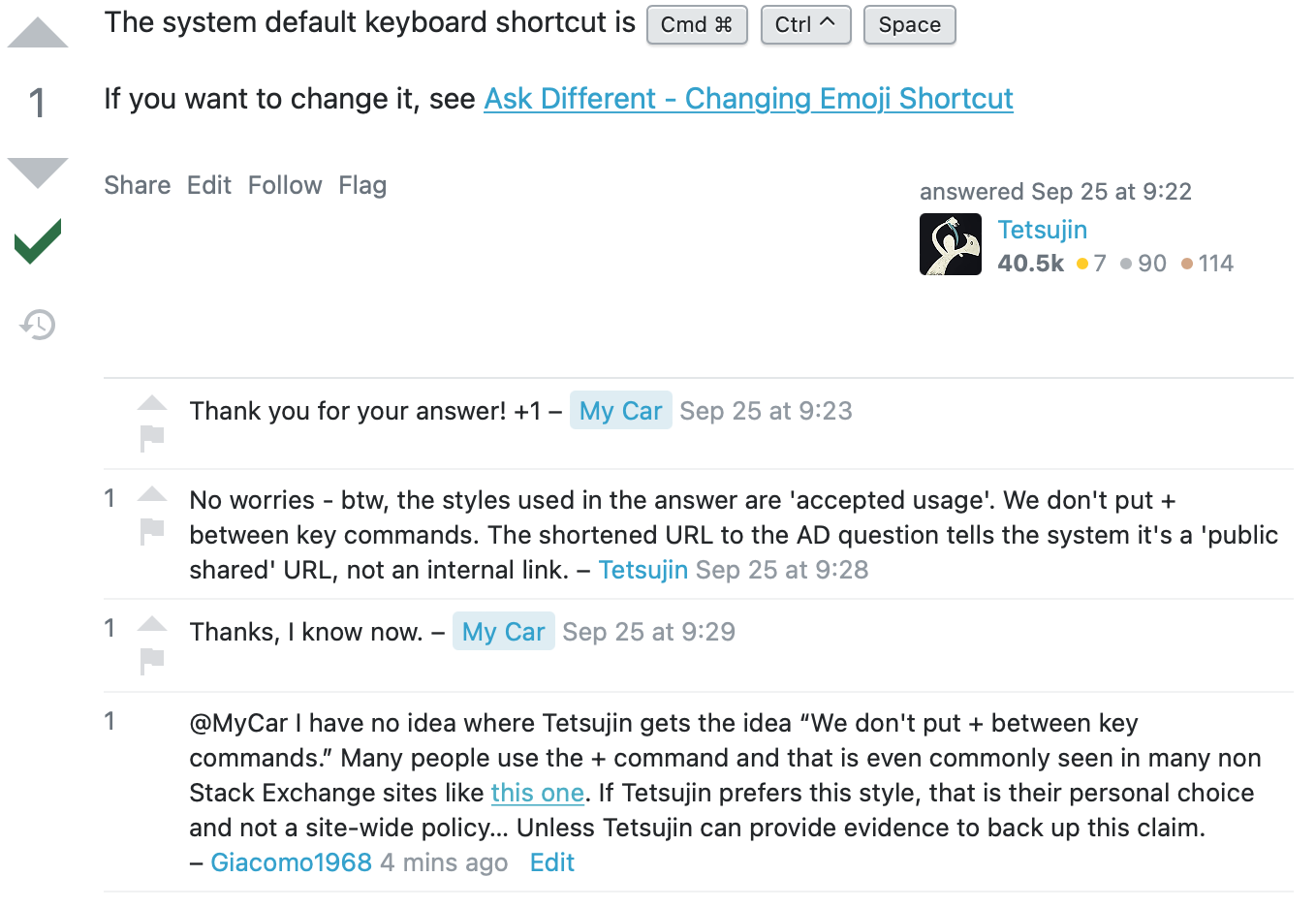 Here's data from actual posts on the site:

Out of curiosity, the numbers for Ask Different. The "plus" style is still the most common one, but "nothing" style is much more popular relatively speaking.

You are correct to reject that edit suggestion. The top-voted answer in the Meta SE FAQ post, Denoting keyboard shortcuts in Stack Exchange posts recommends putting "+" between keystrokes. The Microsoft Style Guide also recommends writing it this way.

Putting the hyphen (-) between keystrokes is also acceptable in the context of macOS since Apple recommends writing it that way in the Apple Style Guide. Though in the same style guide, Apple also recommends:

Key graphics: With graphic representations of combination keystrokes (in tables, for example), use the plus sign (+) instead of a hyphen between keys.

Since the <kbd> tag adds a graphic representation of combination keystrokes, e.g., Ctrl + C, it is preferable to use it with "+" instead, even in the context of macOS.