Ask Question
Asked 11 years, 2 months ago
Modified 11 years ago
Viewed 130 times
2
This question is unlikely to help any future visitors; it is only relevant to a small geographic area, a specific moment in time, or an extraordinarily narrow situation that is not generally applicable to the worldwide audience of the internet. For help making this question more broadly applicable, visit the help center.
Closed 11 years ago.

After posting a comment, Internet Explorer 8 refreshes and displays SU (or any other SE site) in compatibility view:

When viewing in compatibility view, the tag formatting is broken: 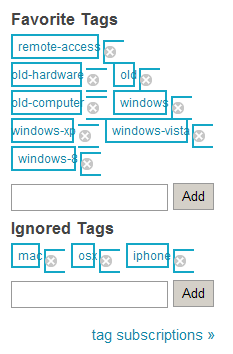 Any idea why this is happening? Is it just another stupid Internet Explorer bug?

I started having this problem last September (IE8 under XP). I uninstalled several major software components - applications, device drivers, fonts, etc. (then re-installed most from scratch), after which the problem went away for some months, but reappeared just before Xmas.

This time I just didn't have the energy to go through all that uninstall/reinstall stuff - I never knew which component was critical, and obviously it was likely to fail again later. I switched to Google Chrome - within 1/2 hour I was finding Chrome just as easy to use (and much faster) After a day or so I was fully up to speed with Chrome, and I can't believe I put up with IE8 for so long just to avoid learning a different (and vastly superior) user interface on my browser!

TL;DR: Dump IE8 and switch to Chrome! You won't regret it!