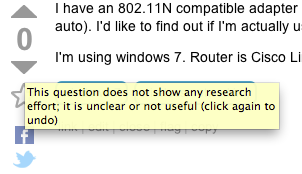 2
Is there any moderation for users who cast counter-productive votes?
15
Surge of one-point-profiles
13
Negative up-vote/down-vote ratio: is it effective mentoring, or too harsh?
2
Question closed due to "lack of research"