There are time limits as to when you can change an upvote or downvote on questions and answers. Once you cast a vote, I think you have 5 minutes to change it and then it's locked in until the respective question or answer is edited.

This makes sense. Except when you can be the one that edits it. And then change your vote. I know that once you're granted editing permissions, you're a "trusted user in the community" so it's unthinkable that someone would abuse this.. but it is possible. And I know abuse of this would be caught through viewing a user's history. I think it is status-bydesign but it seems like a bug. It allows for users above 2K reputation to manipulate past votes on answers and questions.

What's my point, you ask? I sort of brought something up and then shot down the obvious solutions, leaving us to determine this is entirely status-bydesign through lack of alternatives. I guess I wanted to bring up a discussion to see if any of the better minds could think of why this is okay and doesn't need to be fixed, or what could be done to fix one or both of the "problems".

@slhck found this thread that talks about this as well. But it doesn't talk about going over the limit of 40 votes per day or the totally insane ninja skills of @danielbeck

Could not reproduce more than 40 votes in a single day at the suggestion of @Anna Lear ♦ , I must have been mistaken. Edited question to ignore this part. Dev reference here

How about we undo any vote on any post without anyone noticing we circumvented the locked vote restriction?

It takes less than a minute in all cases to undo any vote, making the vote locking restriction entirely useless. It doesn't feel like a feature apparently only intended to affect new or clueless users (like "problem" titles), so this feels like a bug and should be fixed.

Here's my totally innocent editing history on the site I performed the changes shown above. No edit is displayed, it's simply removed from the system, but still allowed me to undo my vote: 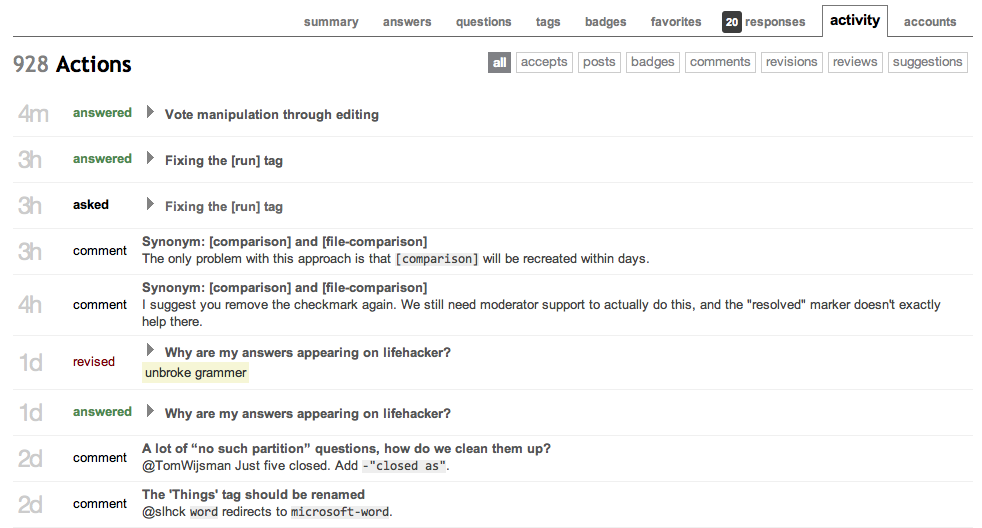 Here's a simple rule amendment to fix it:

Your own edits should not unlock your vote and enable you to change your vote.

Has this been implemented? I hope not.

I have sometimes used this trick to retract a downvote I cast in error. For example, I may have misread something in the OP and downvoted, and later --after having coffee--, realized that the downvote was not merited. I would then simply do a little edit, correct a minor error or something and then change my vote. I think this is useful and cannot really be abused.

In fact, I am not sure why the limit is there in the first place. Why can't I change my mind? I expect it does not happen very often but it has happened to me a few times, perhaps when looking at a post with new eyes, I reach a new conclusion about its merits. Why should that be disallowed?

21
Help us clean up Super User
13
Editing privileges suspended - reactivated at 2k rep
7
Suggestion for a system to vote on edits
26
Should reviews limit be increased?
2
Is there any moderation for users who cast counter-productive votes?
22
Did I create, then fail my own review audit?