Downvoting a question should require a comment/upvote of a comment

As you've seen in the title, In my opinion, a downvote at least requires a short explanation in the comments or an upvote of a comment if the comment already explains the problem.

Otherwise, the person who asked the question(often a new member of superuser.com), will keep asking questions like this and will wonder, why he doesn't receive any useful answers.

If someone downvotes a question, then he has to write a short explaination in the comments or, if there is already a comment which explains the downvote, to upvote this comment. 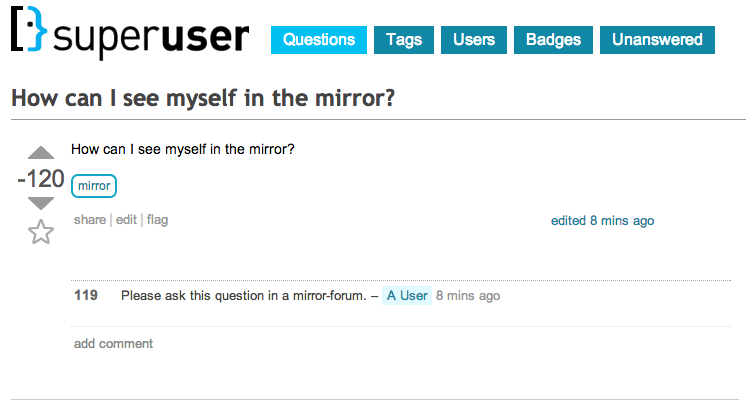 This has been requested hundreds of times in the history of Stack Exchange. The Stack Exchange founders and team are adamant that voting shall always be anonymous. Requiring a comment to downvote would remove that anonymity. Changes were made to remind people to leave a comment when downvoting, but it has not been made and will not be made mandatory.

A person has to wonder though, if everyone made a comment on thier downvoting , it might not be as helpfull to the new user, or to the site. So if a requirement is created, then the requirement would have to also include writing something useful, otherwise it is not going to happen. The comments would be about as usefull as stoning people in the town square was :-)

It of course becomes even more complicated, as each interpretation of why they downvoted, creates a stigmatization, and solidification of rules that in reality do not exist.
What???
This site is "run by the community" the community make up many of the rules by which it operates. To condemn the community to todays rules, is to condemn all future chaging or adaptation of the rules.
If all questions are commented as to why some rule was broken, it leaves in place all over the site a reinforcement of rules that may not be good for the growth of the site. Rules that can someday change.

Having 50000 comments on questions that whine out "Thats against the rules" , will lock down the rules to humans mentally never forgetting the rules. rules which are not locked down. Links back to the malable community information, would always point in the right direction.

That is my perspective on it.

If 10 downvotes with negative comments were a reason to remove a YouTube video off of YouTube, there would only be 6 videos on the site. And once people started watching them, it would be the end of that also :-)

-1
Special requirements before voting a question into negative territory
1
Penalty for unexplained down-votes
-4
Why do people can downvote a question without justification?

5
Comment vote equilibrium: Ability to vote down
2
In comment @replies, can the user shown link to their profile or the comment being replied to?
9
Cancelling a comment upvote
2
Make reviewers explain why they accept a suggested edit
8
Require registration to post questions (and answers)
2
System should teach users more by asking questions and showing FAQs
19
Add a 'No Caps Lock' message/hint/check on the website
2
Downvoting a Closed Thread?