How do I reject an edit to my answer

Someone edited one of my answers (actually edited the same answer twice in 2 days), and BOTH edits were approved by other people (reviewers, I assume). The edits were BOTH very minor and only added 1 external link. That exact link was already mentioned TWICE in the QUESTION, so adding it to the answer is not only "minor", but it adds nothing of value.

In any case, the text and link that were added points to incomplete information that contains only partial information about "Command-line options", not what I would consider full "Documentation". I had the opportunity to add this information when I wrote the answer but I intentionally left it out because it is incomplete and was already included within the question.

Do I get a chance to "Reject" an edit to my Answer (if so, how)?, or do I just have to edit the answer a third time to remove (rollback) the other person's 2 edits?

While reviewing, the reviewers have the option to reject an edit - you also get a notification when an edit is suggested, so you can go ahead and reject that edit.

If the edit has been approved, you can always pull up the revisions by clicking on the last edit timestamp & then choose the revision to which you can rollback to. 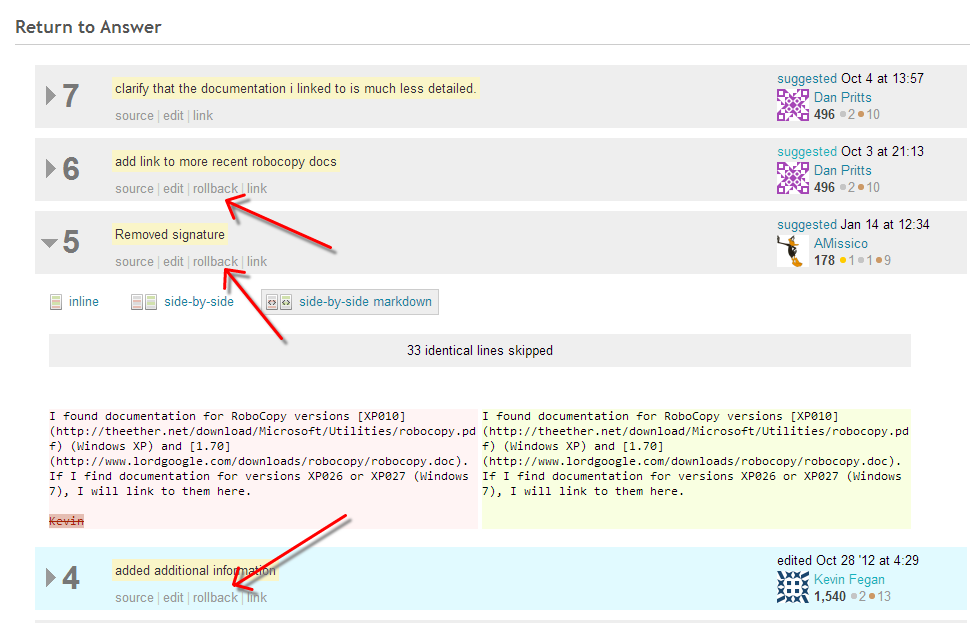 Now, wrt to this edit - is the editor Minor? I think not. Do they refer to the same documentation? I'd argue not - you've linked to the one which applies to

whereas the edit links to documentation which applies to

I haven't gone & done a diff of the two versions to see if there's any difference, but having an answer which links to the latest revision of the document is always preferable.

2
Make reviewers explain why they accept a suggested edit
9
Why were my suggested edits rejected?
7
Warn when Approving Edits for Questions On-Hold
3
How do I rollback an edit to my question
4
What happened to the "Improve Edit" and "Reject and Edit" buttons on this review?
4
Please make this salvageable post not be an LQ review audit
11
How is my edit not considered an improvement?
2
Please offer guidance as to why this edit was rejected
8
When should additional information be an edit vs a comment vs a separate answer?