I was previously using this bug to my advantage, but now I'm being honest and reporting it. Anyway, normally, when you flag an answer as "not an answer" using the standard option and you have already flagged it as such (and the previous flag has been dismissed with a status), 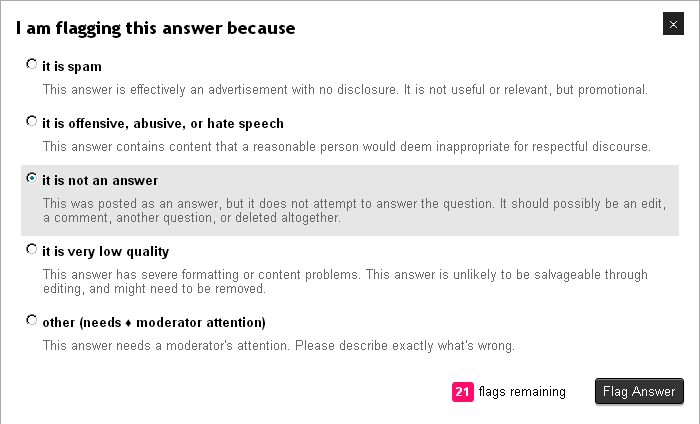 you receive an error message:

However, you can flag it as not an answer again using the manual entry box:

...and the system will treat it as a normal not an answer flag, even though I have already flagged it previously as such. The proof:

This seemingly incorrect behavior should be replaced with one of the following:

Anyway, it's a bug, and it could be used to one's advantage (keep flagging until it is deleted), and it should be fixed.

I'm not sure if it's a bug. the previous flags are dismissed and you're flagging it for some other reason, perhaps the post has been vandalized again. It's up to you to not flag it multiple times.

And oh, don't be fooled thinking Mods don't notice this or others haven't tried this before. Frivolous flags are treated with disdain, and not only we decide to not take your flags seriously, the system will learn the same. Don't do it.

Not the answer you're looking for? Browse other questions tagged bug status-completed flagging not-an-answer .

8
Is there a way to block the recreation of the "bug" tag on the main site?
16
Flagging posts that answer the question with something the OP has already dismissed
1
What is "not an answer" supposed to mean?
3
"Not an answer" flag declined on answer that merely "clarifies" another answer
2
"You have already flagged this post" tooltip shows up too late
5
Why are generic flags not available for low score answers?
3
Moderator Flag Etiquette?