Question deleted with no recourse?

I have a question closed https://superuser.com/questions/831078/yosemite-osx-install-stuck-on-first-step and a moderator comment "Don't use pirated software?" when this is not the case.

There isn't even a way to contact the moderator or another mod.

I think not having a recourse to explain the situation is a bad idea. Maybe a moderator can hold/review a question until he gets more clarification? But deleting the question directly seems a bit rude to me.

The primary reason for me deleting this was that I considered it unanswerable in its current form - I figured it would be deleted anyway.

For the record, this is the question as it was 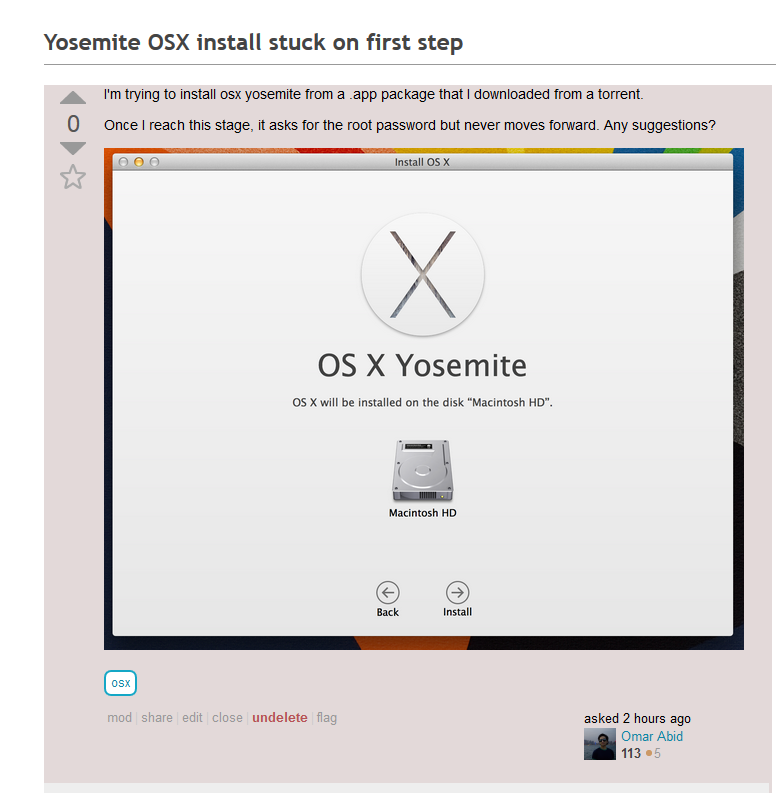 "I'm trying to install osx yosemite from a .app package that I downloaded from a torrent."

Uh huh, outright piracy, and of course, not enough information for us to determine if his download was at fault.

"Once I reach this stage, it asks for the root password but never moves forward. Any suggestions?"

No actual attempt at troubleshooting - no error messages. No real clue for anyone what is happening.

In short, I had the option of putting on hold (And I tend to prefer this in most cases), or putting a clearly low quality question with many issues out of its misery as soon as possible.

I went with the latter. Really, 2 lines and a generic question do not make a quality question, and it didn't seem worth salvaging.

However, there's always a recourse.

4
Why was my question deleted?
0
'Best iPad stylus' question deleted as off topic
3
Question closed as duplicate of deleted question
2
New OPs answering their own questions
7
Question deleted
11
How is my edit not considered an improvement?
0
Moderator justification and considerations for closing a bountied question prematurely