I just got this question – Conversion from WebM to MP4 in Ubuntu is slow and bad quality – in the Reopen Review Queue.  The question displays a command and its CLI output, and makes an attempt to diagnose part of the problem:

It also does not play with Windows Media Player.  (The reason for this is the mpegv1 to which the file is converted.)

And, most importantly, it was not closed!  I opened the revision history and saw that slhck♦ had closed the question, edited it, reopened it, and answered it, all within a 23 hour period on Feb 5 / Feb 6.  (The OP also made substantial edits during this period.)

Since the review queue was asking whether I wanted to reopen a question that was already open because it had been reopened by a moderator, I concluded that it was an audit (although, clearly, a poorly constructed one), and so I voted to reopen it.  Naturally, the audit orc jumped out and hit me with his cudgel: 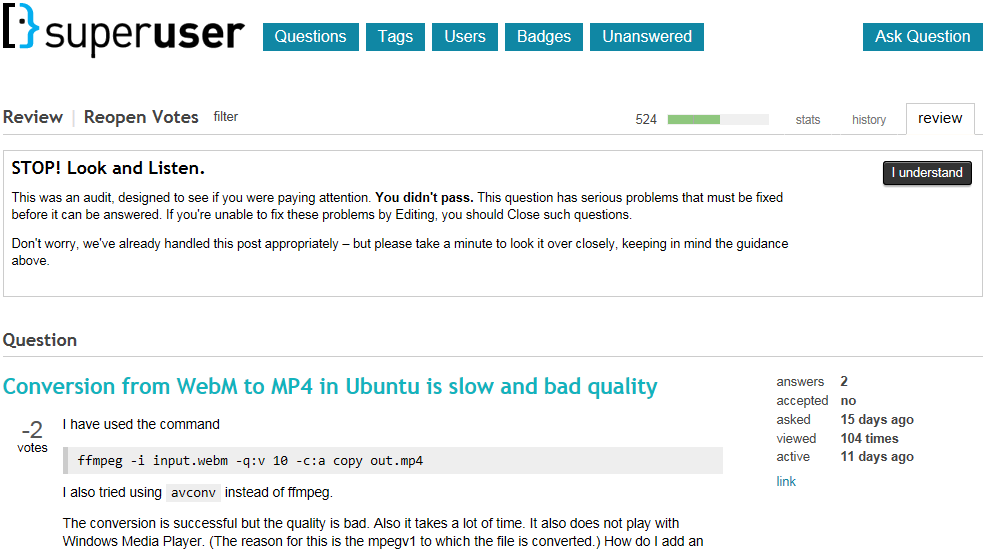 (This image links to a full-sized copy of itself.)

I guess I have two main points:

27
Strange audit result
3
Did the review process trick me?

4
How are questions for reopen audits chosen? Can we exclude some?
15
Mechanism for scrapping bad audit questions?
4
TIL: Answering 10 minutes after a question is asked is "late."
22
Did I create, then fail my own review audit?
27
Strange audit result
3
Questionably bad answer used for audit