how do you stop a user from harassment?

What steps can be taken when a user gives endless, long-winded, and bellicose comments expressing opinionated answers almost every time you post a question?

Most users of this site are here for information exchange and understand that the whole idea of stack exchange is for multiple answers to be available, giving a variety of possible tools to future readers.

When one user pollutes postings with verbose, opinionated comments, they deter other users from giving valid answers from alternative viewpoints. What avenues are available to complain about such noise-making by a specific user?

The Help Center says it better than I can, here --

There are community moderators (members of the community who have been elected and have additional powers to e.g. delete stuff and ban users), and there are Stack Exchange, Inc. employees (a.k.a. staff).

I suggest against using the "contact us" link unless you have already tried multiple times to get the moderators to deal with the problem, and feel that they have not done a proper job.

In almost all cases, simply flagging the question or answer (even if the problem is in the comments, the moderator will read them to check) will be enough to get your problem solved. 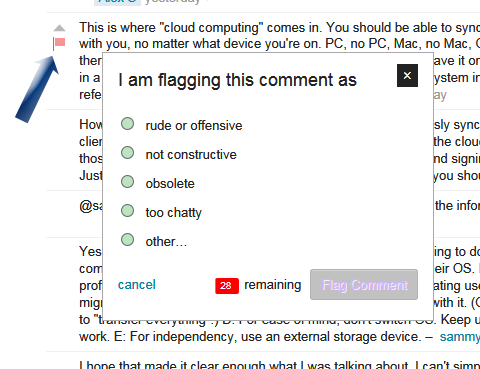 Also, you are strongly encouraged to not attempt to respond in kind to the person who is treating you badly. You may end up in the crossfire and the moderator may decide to suspend your account as well as theirs, if your retaliation back at them is sufficiently bad.

So when you see someone writing something offensive, stop contributing to that question/answer/comment thread entirely right away. Then flag it. Then leave it alone for a day or so, until a moderator has had a chance to clean it up. After that, you can go back and do your business as normal.

Preface: I realize this answer does not directly address the hyperbolic “bullying” procedure claim, but I believe if I am going to be personally accused of supposed “bullying” I need to provide full context.

If you believe someone is bullying you, just flag a moderator and report it. You accuse me of “bullying” you? Please step back a bit and get some perspective. You state the following:

When one user pollutes postings with verbose, opinionated comments, they deter other users from giving valid answers from alternative viewpoints.

CodeMed, you have 28 questions with little to no answers. In one question I interacted with you on you self-deleted it because you were not happy with my comment that stated in summary, “If you do not understand networking, are trying to do what you are trying to do and don’t even understand what a basic wired Ethernet router is you are in over your head. Sorry.” Sorry if that upset you but honestly, if you are in over your head some people will clearly state that.

And in another question you posted your own questionable self-solution. Of the remaining 26-27 questions you seem to have little to no conclusive activity on those questions which has 100% nothing to do with my interactions with you on 2-3 questions at most.

I’m not discouraging anyone from engaging with your questions, but perhaps you need to step back and realize your questions might be getting low traffic for a reason. And that reason is not me.

Perhaps the questions you are posting are getting low to no responses/traffic is because when others are trying to help you clarify, cleanup and better contextualize your question you take any change/comment so personally that (1) people attempting to help you give up in frustration and (2) anyone stumbling across your question is just baffled by what you are asking and why.

What steps can be taken when a user gives endless, long-winded, and bellicose comments expressing opinionated answers almost every time you post a question?

I will state that I believe CodeMed is referring to handful of interactions I have had with them over the past few days. This claim of “…almost every time you post a question?” is nonsense. CodeMed has about 28 questions posted and I have interacted with CodeMed on perhaps 2-3 questions mainly in the forms of edits and comments.

Specifically I believe the interaction that CodeMed is referring to stems from this question and answer thread. So that claim of “…expressing opinionated answers almost every time you post a question?” is utter nonsense. I would like a moderator to review my interactions with CodeMed and confirm this if possible.

The comments on the original question boil down to this: I clearly stated that if the user wants a clear answer to their question, they should provide a fuller picture as to what they are attempting to achieve in their exercise. If you check the revisions—specifically this third one and this fourth one—I made to this user’s initial question, I edited the question to fully clarify what they are attempting to do.

To be non-meta: What irked me—and still irks me—is how while this user is definitely doing the correct thing by posting a new question for each item they are trying to tackle, they are not providing clear context of the overall goal.

In this case, the user insists on using a direct Ethernet-to-Ethernet direct connection to link up two machines so a VirtualBox guest OS can then talk to a physical machine connected via this Ethernet-to-Ethernet direct connection. I personally believe that this kind of setup causes more headaches than needed. Especially from a user who claims—and I definitely quote—that they don’t know anything about networking. Instead I recommend they purchase a $50 (at most) wired router to connect the machines to make their life easier.

Back to meta: So when I saw this question and answer thread I just believed the lack of the details on the Ethernet-to-Ethernet direct connection would only make this thread harder to understand and lead to more and more endless questions that do not provide any help to anyone but CodeMed.

Which is all to say, that in this particular thread on networking, I strongly believe that CodeMed is using SuperUser less as a site where all can benefit from a well formatted and clear question and more just using this site as an endless help ticketing site for their own “help desk” needs which I believe flies in the claim made in this meta post, “When one user pollutes postings with verbose, opinionated comments, they deter other users from giving valid answers from alternative viewpoints.”

Nope. I am not engaging in behavior that I believe discourages discourse. Rather I am attempting to help other users who might stumble into another user’s non-complete picture post get a better idea of what the fuller picture is. In this case, yes… At face value someone asking to get a larger network connection to another host might require a “Bridged network” but the lack of the critical detail on the Ethernet-to-Ethernet connection results in good hearted answerers being lead down an endless rabbit hole of follow up questions that one cannot escape from.

In this case CodeMed posted a supposed “answer” that the “solution” was to upgrade VirtualBox 4.2 to 5.0. As my first comment states, I do not believe this actually “solved” the issue in the way the user claims it “solved” the issue because, as I stated:

This is not really an answer because if the network connection on the host OS machine was properly recognized, that “Name:” pulldown under “Bridged Adapter” would have options already in place. Perhaps VirtualBox 5.0 has nicer accommodations for direct Ethernet-to-Ethernet connections but I am using VirtualBox 4.3.30 and have all options available when selecting “Bridged Adapter” without thinking twice and this has been the case—at least with me—since at least VirtualBox 3.0. Meaning what you believe “solved” this issue could just be a big coincidence and nothing more.

And I still stand by that comment. If CodeMed believes stating a practical reality that their “solution” was not a solution, I have not much else to add. As it stands I believe that the thread I am specifically referring to actually helps 100% of nobody because:

I will admit, sometimes I come off as a bit harsh in discussions. But at the end of the day, this meta thread that claims “bullying” is ridiculous. I might have misstated that I have followed CodeMed’s questions, but let me clarify: I have no need to follow CodeMed’s posting activity explicitly… All I have to do is wait a day or so until another non-contextual question that does not reference past questions is posted and I jump in to copy edit to clarify it.

Should I perhaps stop copy editing and cleaning up CodeMed’s question? Maybe. But can someone please review the edits I have made and point out explicitly how my edits count as “bullying” and “non-improvement” of the question to benefit CodeMed, other users and even anyone who is Googling on the topic.

I really do not have time for this. CodeMed if you believe I am personally “bullying” you in my edits and comments, my apologies. But past that I believe your claim that my edits and comments “discourage” others is utter nonsense. There was another user who commented on the question mentioned here and I commented to them at one point (now deleted) that they should look at your question answering history before proceeding to assist any further. And I stand by that statement.

Believe it or not we are here to help you. Me included. But if you are on the one hand going to claim you have 100% no knowledge of a topic but then the next claim you know answers that others disagree with for very valid reasons, I have no idea what to say and cannot imagine how anyone can help you in your efforts to fix issues you face.

Yes, this site is a community. And this screed is me being a tad pissed off. But if people are going to complain about bad quality posts and then someone who takes actions to improve such posts is considered a “bully” then this is not what I understand the Stack Exchange network to be.

P.S. Also, I still believe the core networking issues CodeMed faces would be solved by a simple less-than-$50 wired router. But then again, I don’t believe CodeMed actually wants to ultimately solve a problem but rather just post endless threads of vague questions for whose value exactly?

P.P.S. And apologies again if this post is perceived as “bullying” and/or “harassment” but if you are going to claim my edits, comments and actions are negative to the site, you bet your bottom dollar I am going to point out how I believe your questioning-style only benefits you and not the community as a whole.

Not the answer you're looking for? Browse other questions tagged support abuse .

3
SU Review, how to stop "watching" a tag
5
Request to reopen 396626 (How do I stop this message?)
7
Offensive user names
3
How does rep carry over from Super User to Meta Super User?
8
How do you thank someone?
6
How can I stop repeated adverts of articles from somebody that admits he is a rubbish coder?