So doing some review queue stuff a few minutes ago and I came across this item. The original question is about remotely shutting down a PC that has no apparent RDP connectivity. The answer I wanted to delete was basically recommending building a Rube Goldberg contraption:

Find an old computer with a CD-ROM drive. Install linux. Name it HOMECOMPUTERSHUTDOWNROBOT. Find a plastic stick, about 2 inches long. Superglue it to the CD-ROM door so that it sticks straight out from the computer. Position the old computer so that the stick points at the power button for the computer you want to shut down. Use old books as necessary to prop the computer up to the needed height to do so.

When you want to turn off the computer, SSH into HOMECOMPUTERSHUTDOWNROBOT. In the terminal, use the eject command to eject the CD drive. The plastic stick will push the power button of the computer not supporting RDP and turn it off.

Okay this is a cute idea that shows a creative use of an ejectable optical drive mechanism. But come on? I failed an audit for saying this idea should be deleted?

The question has a very good accepted answer as well as a much higher ranked alternative answer. This joke answer was posted hours after those other answers and really adds not much.

Screenshot of the audit context here: 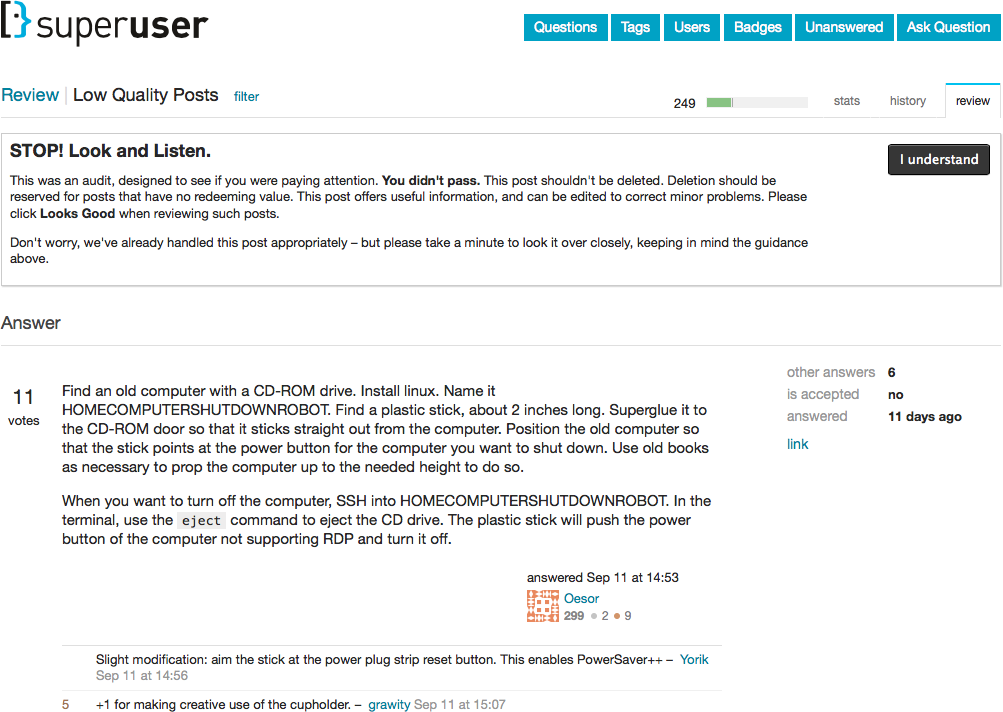 As has already been mentioned several times in all the "failed audit" meta questions mods have no say in what questions go into audits.

Technically though, that is an actual valid workable answer to the question. That there are other and better answers is irrelevant.

It sounds ludicrous, and it probably was meant as a joke but it is a solution that would probably work. That makes it an actual answer.

Mods, while having a greater say in what happens on the site, are slightly constrained in how they can act. Unanimously running rampage across the site deleting anything that we find is considered a "no-no". We try, wherever possible, to act with the community consensus of what is acceptable on our site.

Just because someone doesn't like an answer or thinks an answer it "too silly" or is "missing the point" does not make that answer any less valid than any of the other answers and mods have to keep that in mind when dealing with flags.

If you want that answer gone from the site then I would recommend asking a meta-question specifically asking whether we should allow these types of answers. Generally though (and I know this is regarding questions) we don't hate fun.

4
Should humorous/funny questions be deleted from Super User?
4
What happens if I fail too many review audits?

4
I have an answer for my "too broad" keyboard question that was closed yesterday - shall we re-open it, or forget it?
2
Kobayashi Maru: I failed an audit that I couldn't pass
4
Failed a few tests recently for reasons that fail
3
Questionably bad answer used for audit