Why not to implement a Keyboard Shortcut feature?

Often I find myself manually typing <kbd></kbd> tags to define a shortcut inside the editor.

Shortcuts are very essential in "Super User" context, and I think, as a formatting feature, at least in SuperUser branch of Stack Exchange should be included inside the editor's toolbar.

It's neat and looks very nice, and very readable as well improving the legibility and user-friendliness as it's harder to manually type the tags in between the keyboard key names every time.

For example, Ctrl+Shift+Esc is a nice way to indicate the keyboard shortcut to launch the Windows Task Manager application.

Moreover, I don't know how to do its formatting with Markdown. 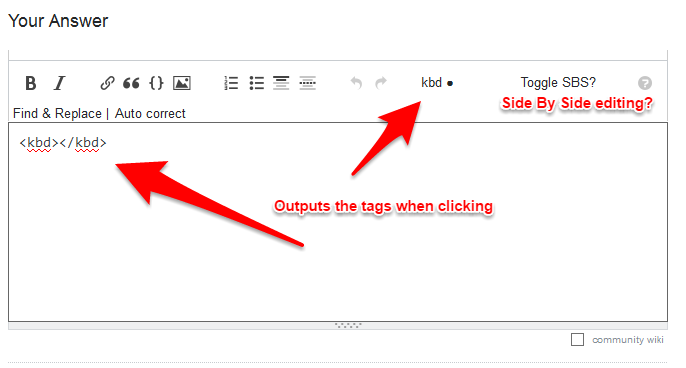 As a fact, it also changes the Topbar looks

It doesn't look very neat and is hard(er) to install in terms of user-friendliness, after going through some confirmation dialogues.

Your desire has already been fulfilled. See SOX. It adds 50-some improvements to the Stack Exchange UI. This includes a number of enhancements to the post editor, one of which is automated keycap markup tags (select text, click button, instant_keycap_formatting).

The list of SOX features is here. Installation instructions and the install link are contained in that first Stack Apps link, first line of this answer.

38
Please add a toolbar button or keyboard shortcut for the Keyboard style
5
Feature Request: Downvotes not charged if item is deleted
14
Feature request: Stacking bounties
0
To improve the Superuser search feature by allowing partially match ("like", "contains") logic
5
Any plans for a Documentation feature within SuperUser?