Am I doing something wrong?

I can understand this answer being downvoted but my one and only question was also downvoted almost at the same time? Weeks after the fact?

And it's weird that in the "achievements" menu both have a -2 but opening the pages it shows -1???

Please give suggestion for improvement. Thank you.

Please give a suggestion on how to improve the question.

I will preface this answer by the fact I have absolutely no skin in the game. 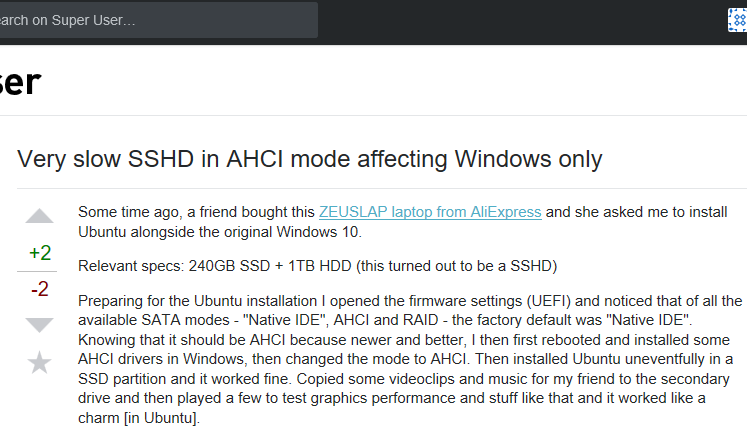 I read your question several times, and I see a narrative that has little to do with your actual question, which is simply you successfully switched from Native IDE to AHCI and the result was a performance issue with a secondary drive. You should consider removing the narrative that isn't required, present the facts quickly, and just give us the meat and the potatoes. If somebody asks for some of the sides then provide it at that time in the form of a transparent edit to the question.

However, once I get through the narrative that has little to do with the odd performance hit you encountered, I am left with no information on your hardware. Which means I cannot research if more people reported issues with AHCI mode with that particular SSHD.

The type of information I am looking for with regards to the SSHD in order to answer your question, is that exact model of the SSHD in the device, something the AliExpress product page does not specify. You mention switching to AHCI mode, which requires drivers but didn't provide any information about those drivers. Depending on the instructions you used, you could have used drivers that are incompatible with Windows 10, but nobody reading your question could confirm that fact. There are several AHCI controllers on the market, if you had indicated which one the device had, people might have suggested using a more recent driver.

There are also upwards of 8 grammatical mistakes that Grammarly has flagged. While they are small issues, when combined with no specifics about SSHD, and the extremely wordy narrative and you have yourself a candidate for a contribution that should be improved. You also tagged the question, with the Ubuntu tag, which has little to do with your actual question.

I can understand this answer being downvoted but the only question I have asked was also downvoted almost at the same time? Weeks after the fact?

You also seem to have been happy with the single answer you received, per a comment I got the impression, you actually considered it as answering your question. You get reputation points for accepting an answer. By doing that it would have nearly negated the reputation you lost from the two downvotes by the way.

8
Why is my reputation on SU/meta.SU different from the one in SO/meta.SO?
6
What should I name my chat bot? And updates to greeting message
19
Rant: Owner Deleted questions — there must be a better way
8
Down for the Countif
1
Downvotes with no comments
9
Could a special case of “hardware recommendation” be on-topic?