The question was easily understood (I had no difficulty understanding it whatsoever) and my answer was entirely correct NOT speculation, and based on experience. If the other person wished to offer another answer - fine. But I was NOT wrong. It should not have been downvoted. The kind of indiscriminate downvoting I get serves ONLY to beat up, belittle and demean people. It does serve any useful purpose except to drive good people away

The kind of indiscriminate downvoting I get serves ONLY to beat up, belittle and demean people. It does serve any useful purpose except to drive good people away

I am absolutely not the person who downvoted your answer, but your answer doesn't answer a single one of the multiple questions the author actually asked.

Here is a list of the questions the author asked: 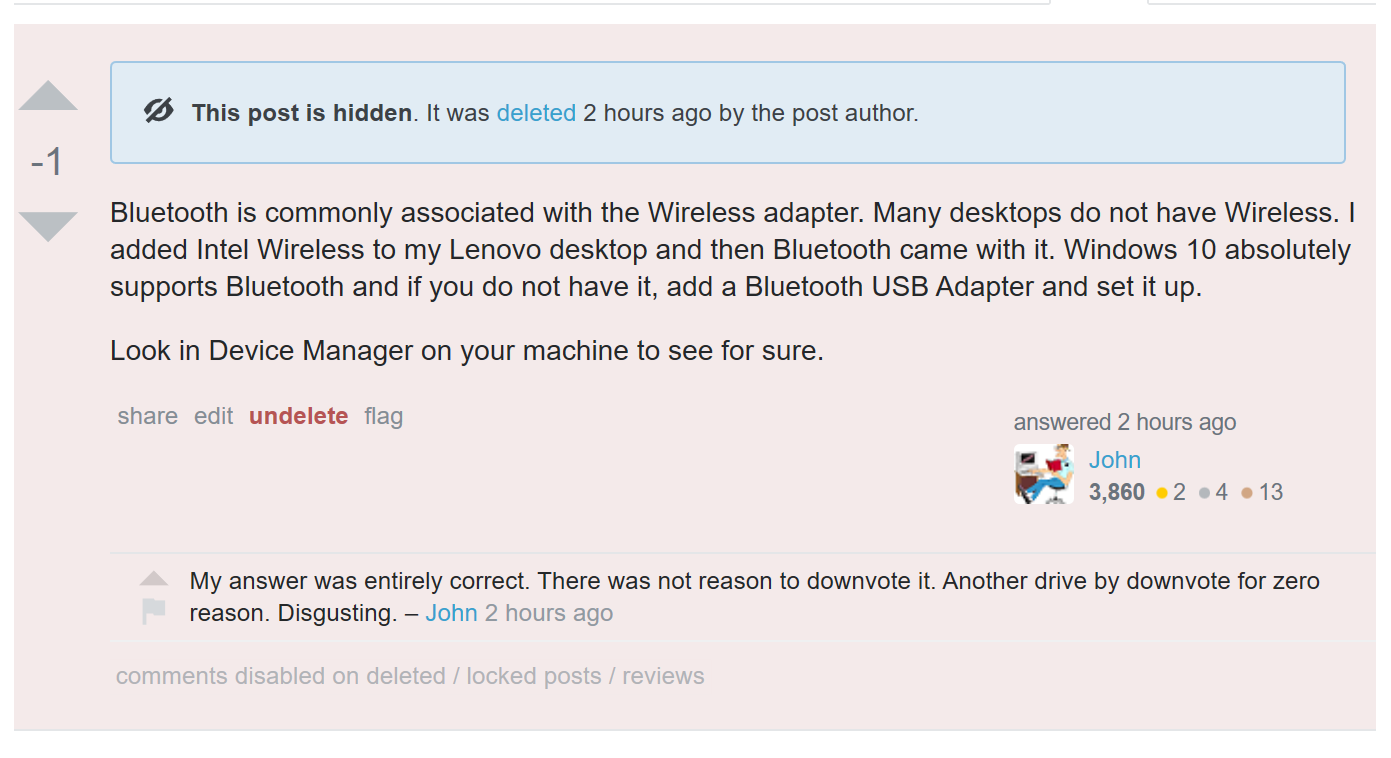 You indicate that Bluetooth modules are commonly associated with wireless adapters, which is common on laptops, but I fail to see how it answers any of the author's questions about their desktop.

The PowerSpec G419 absolutely does not have a Bluetooth module. If you had pointed this fact out, it's unlikely, your answer would have been downvoted. You were also given feedback, granted it was under the question, due to the fact you deleting your answer. That person indicated that due to the author's four different questions the question should be locked and improved before being answered.

Your post was/is a comment because it was speculation. And the specs for the PC (PowerSpec G419) are easily accessible online and there is no indication that the PC in question has Bluetooth or a Wi-Fi card with Bluetooth mixed in.

This question as off-topic because it is all over the map and utterly unfocused What is the one question here? And your answer could — and still can — be helpful as a comment which you are fully capable of posting with the rep you have.

In conclusion, the answer was submitted within 10 minutes of the question being submitted. This does not seem to be enough time to submit an answer that was well researched in my opinion.

I personally own a Steam Controller, which comes with an adapter, which will work flawlessly with the controller. In other words, the Steam Controller comes with its own (USB) adapter. Your answer fails to point out this fact and does not answer the real question the author had

To be clear the author simply wanted to know how to get their Steam Controller to work. If you had suggested they read the How to pair to a Wireless USB Receiver, indicated the exact steps to get the controller working, the user who downvoted your answer might have voted differently.

It should be pointed out that absolutely nobody here at Super User can reverse the downvote you received only the person who issued it can give you their exact reasoning. It is also worth pointing out that Super Users Moderators cannot tell you who downvoted your answer.

-1
Valid answer to question downgraded and deleted with no feedback

3
How to know who downvoted you?
34
Concept of “conditional” downvotes?
11
What is the appropriate disposition for “hiccup” questions?
1
Where do we draw the line on questions involving human interfaces?
17
Inappropriate opinion-based closings