While reviewing close votes some times there are some questions that belong to other other Stack Exchange sites or communities such as https://gaming.stackexchange.com/.

Is there a way to suggest questions to be migrated to sites that are not in the migrate to list ? 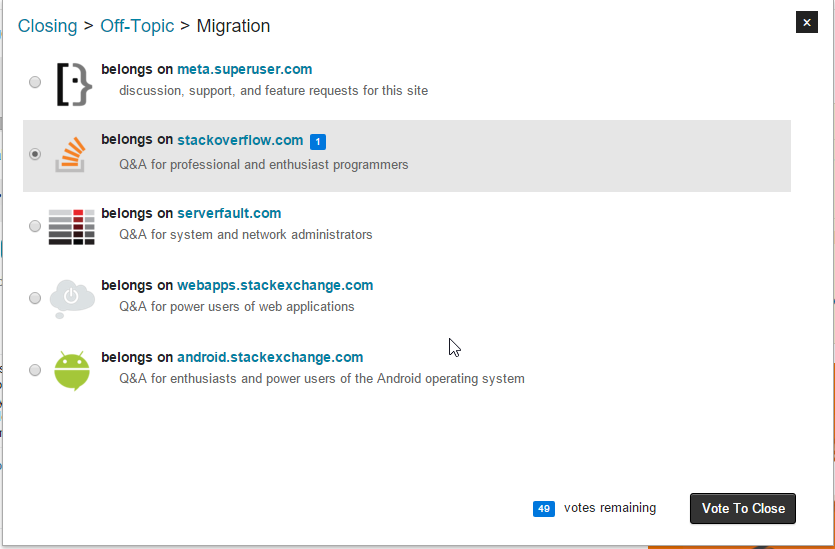 You can always use a custom flag to request a mod move a post. You may not get it, but thats the right way to. As always, make sure the question is worth saving, and is on topic before requesting migration, and I do believe the same age limitation on user migrations counts for mod migrations too.

Each site can have up to 5 migration targets, 1 of which must be that site's own meta. All of Super User's migration targets are currently in use. Gaming.SE used to be an option, but we found that Android.SE was getting more migrations (manually made by moderators) than Gaming was even with Gaming as a default option, so Android was added as a default and Gaming was taken out.

You can always flag with the "other..." reason and ask for a question to be migrated, but remember, if the question is valid on Super User, don't vote to migrate it even if it's also valid elsewhere.

10
Add a migration path to Pro Web Masters from Super User
7
Changing the timescale on the review page
7
Hot or not; Tweak the Top Questions list to discard poor questions
3
Is there a way to exclude questions with certain tags from "Review" tasks?
1
Why do people have to gain reputation on each Stack Exchange site before being allowed to comment?
4
Can I use rep from another Stack Exchange sector to place a bounty?