How can this question about display adapters / protocols be made acceptable?

I recently asked Which of VGA/DVI/DisplayPort/Thunderbolt/HDMI supports all the others?. It was closed and eventually auto-deleted: 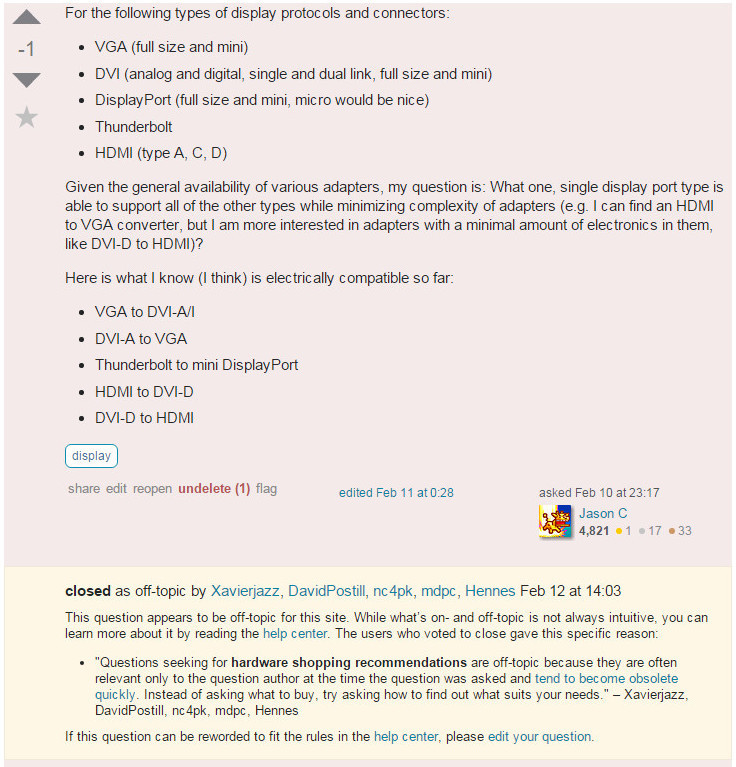 The reason given was that it was a hardware shopping recommendation.

It wasn't a shopping request, though. The question was about compatibility of display adapters and protocols. There are many precedents, including but not limited to:

My intent was to ask a question about display adapter electrical compatibility for a specific set of connectors and protocols, not to ask for some sort of product that does something.

My question is: Why was this interpreted as a shopping request and how could I have worded it otherwise?

The word "shopping" was in the first revision of this question; not to ask for a product but to explain why I was looking (I was shopping for a crash card adapter, so I was looking for info about display compatibility), since I like to give some background to questions to avoid XY situations. During that time it received one close vote, and I immediately edited it out. The remaining four came much later, when the question was in the form it was in above.

Your question was probably closed because it sounded like it was looking for an adapter, which is a hardware recommendation (off-topic).

One possible way to repair it would be to ask about only the electronic aspect and the similarity between the ports, since that seemed to already be fairly important to you. I've edited your question and voted to reopen it.

4
Why was this question about computer monitors closed?
25
Three free video cards for Valued Community Members(tm)
2
Why was my solution converted to a comment?
19
Where to ask for computer hardware suggestions?
0
Why was this question closed and what should I do about it?
13
Possible false positive spam detection. Support and tips solicited
1
Is this answer with 140 up votes really an answer?
1
How is my question about the Windows Registry off-topic?