A few months back, a SuperUser account person had a comment conversation on an answer with me regarding the format bar options. In particular about the code sample/block option from the format bar using what was referred to as "antiquidated".

I asked the question because this account has modified other posts of mine in the past reformatting it using some of these methods entirely changing my answer layout, and I'm all for learning and keeping things simple.

It was also mentioned that the more modern three backticks method is more efficient for various reasons, and stated the four leading white spaces has storage overhead for answer content. 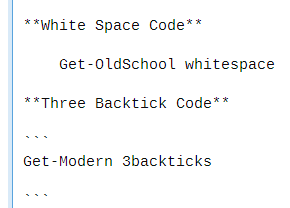 If anyone wants to cut down on SE storage, just edit a few of my posts to remove the wordiness ;-) ...

the code sample/block option from the format bar using what was referred to as "antiquidated".

I wouldn't call it antiquated, but I do personally consider it "non-optimal", just because it's far easier to edit when using the backticks, IMHO. This is just my personal preference, and I do often wish that the SE editor would use backticks rather than indentation for code-blocks.

I would never edit an answer just to change it from four-space-indent to three-backticks, nor would I ask someone else to change their method. If I was making other edits to the post which were made easier by a backtick codeblock, then I would probably convert it. In other words, I'd only change it if it "got in my way."

I guess I'm confused on that point. The end-result of either codeblock method should be identical. If other formatting changes were done, then the person hopefully thought that they were improvements in other aspects.

It was also mentioned that the more modern three backticks method is more effecient for various reasons, and stated the four leading white spaces has storage overhead for answer content. ... Can this technical concern/reason expressed by this person regarding this matter be debunked by some backend storage technology which handles this concern?

Well, maybe. I'm sure a SE staff could answer in detail, but SE is served gzip'd through (I believe) Nginx and Varnish, and both support retrieving the content from the backend in compressed form. I'm not an expert in this area, but I think it's very likely that the markdown is stored on the backend pre-gzip'd.

If this is 100% totally true, is it already on the radar to change that method to be the easy-to-find and use code block/sample option from the format bar?

Well, while I don't use it (since I'm a keyboard junky and I find the mouse movement to the formatting bar inefficient), I'd still love to see it changed just out of personal preference for the ease of editing backticks-code.

And for the same reason, I'd love to see images be inline, rather than with the [] reference at the bottom of the post.

But again, this is purely personal preference.

I think we've probably debunked the "100% totally true" part enough for it not to matter from that perspective.

In your question above, you use **bold** to format the "Format bar code sample option", "White Space Code", etc.

These are more semantically appropriate as headings (####, etc.). And yes, there's a good, technical reason -- screen reader software/accessibility. Not that Stack doesn't have semantic issues in their use of headings, but it's still better than using Bold, IMHO.

Neither of these styles is incorrect, old, deprecated etc. Stack Exchange is using Commonmark which allows both styles: indented, fenced.

Actually, if anything, it's the fenced style that is controversial. I can't find it now, but some opponents of Commonmark have expressed their dislike for that style because it's not as elegant and obvious in plaintext form.

Personally I agree that indented code blocks look better in plaintext, but they are impractical. To indent a larger code block I must use the formatting toolbar or a text editor. Or I can just do ``` Ctrl+V ```.

The triple-backtick style has one notable advantage: it allows enabling syntax highlighting quickly and easily, per code block.

In my opinion, this can greatly enhance the readability of code examples, especially with convoluted languages like HTML.

However, not all languages are available. An incorrect language should not be used, because the result could be confusing (like, say, using C highlighting for Java code). Check this meta thread for details on how code highlighting works.

2
Why the blue bar on the left edge of the code tag rectangle on superuser.com?
4
Adding a table/grid control to the markdown options
2
What in the world is a "code block"?
19
Add a 'No Caps Lock' message/hint/check on the website
3
Style edits - inline formatting versus blockquote formatting (`` vs 4 spaces)
2
should [mathematica] usage/programming questions be on-topic on SU?
6
Edit request was rejected, approved, and then rejected
3
Syntax highlighting for PowerShell is unavailable / inconsistent