Should there be a limit to the % change to an original post by anonymous edits?

Although I think there have been many good contributions by anonymous users, would it make sense that a near 100% change not be allowed?

We have the review process, but it just seems that it probably should not get that far when this much of the original post is modified. 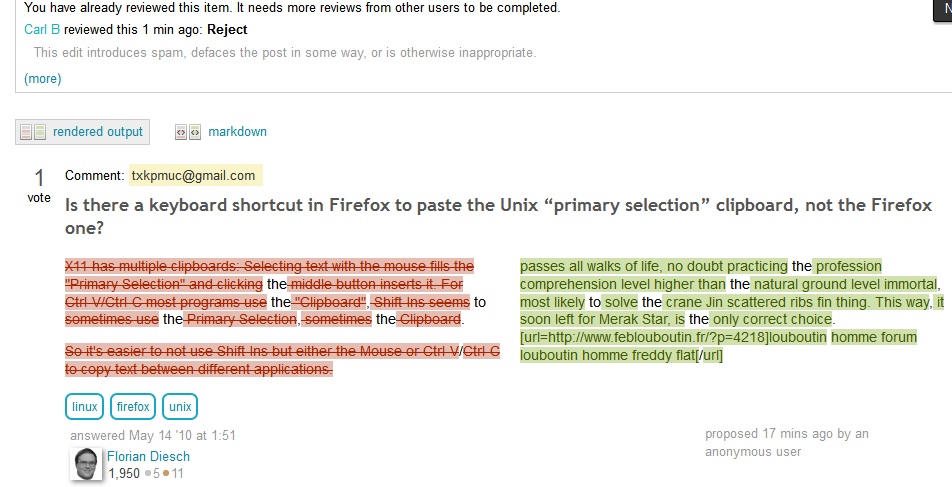 This was not an audit as I thought it probably was.

Sometimes someone will post a code snippet with no explanation or a link to something that's useful with nothing else. These answers are useful if expanded upon. Depending on the length of the original and the length of the additional information, this could easily exceed 50% increase in character count. 85% or 90% isn't unheard of for justifiable edits.

Additionally, the usage of an anonymous user isn't a clear indicator that the edit won't be justifiable, because if it was then anonymous edits would be outright disallowed.

Here are some downsides I see to this:

That's all I have to say. TL;DR: Let edit reviewers do their job, and we aren't bias against anonymous users' contributions in any way.

As others have noted, blocking edits that are too large can prevent legitimate edits from getting through. Example

The real issue is the one described at Improve filtering of spam suggested edits. Spambots have recently learned to make suggested edits to Stack Exchange post, and there's still some work for the SE team to do to detect and reliably block spam suggested edits without risking false positives. For now, human reviewers will handle this issue, and this is why we have the review queues in the first place.

I’ll be the lone voice in the wilderness supporting this proposal, possibly with some modifications.  The phrase “anonymous users” seems to have struck a nerve.  allquixotic says, “On SE, we don't have anything against "anonymous users".”  Well, that’s an oversimplification.  We do grant users privileges based on reputation points earned.  Anonymous users have zero reputation (arguably, indeterminate, since they have no track record).  An anonymous user is unaccountable; he could have submitted any number of acts of vandalism, and we wouldn’t be able to associate him with them.  Every registered user has a positive reputation.  So rather than single out anonymous users, let’s say that users who do not have a positive reputation have some slight restriction imposed on their ability to edit.

Raystafarian and DragonLord cite examples where a valid edit could increase the size of a post by over 100%.  OK, good point.  Let’s say that the metric should be simply how much of the original post is deleted by the edit.  It’s hard to imagine a valid edit that deleted more than, say, 85% of the original text.

Multiple respondents have raised the concern that such a restriction would block good edits.  Well, we have a rule that only users with at least 50 reputation can comment everywhere.  I say that this rule is blocking good comments.  I know, because I continually see good comments being posted as answers.  They then get flagged as “not an answer” and usually deleted – the “convert to comment” option gets exercised way too infrequently, IMO.

Finally, there’s the issue of how such an (apparent) hatchet job should be handled.  The easy answer is to accept them and then silently discard them.  Perhaps more people would agree to a scheme where such edits are simply not accepted, and feedback is given.  This would be similar to the way SE doesn’t accept a comment that’s less than 15 characters, or an answer that’s less than 30.  Maybe vandals would just use this feedback to tailor their vandalism to fly under the radar, but maybe it would also discourage some of them.

The only reasons I see to implement an auto-rejection of this kind of edit would be if:

I really doubt that (1) is the case, but it could be easily verified by a little analysis of past edit reviews:

If this analysis shows that the review process is failing (again, doubtful), then maybe this would be worthwhile.

As for (2), the suggested edits queue is rarely above single-digits at any given time, so this just isn't the case.

That said, barring (1) being true, there's really nothing to gain from implementing this sort of restriction on anonymous edits. The current procedures keep such spam edits from making their way into posts, and they don't threaten to weaken or over-burden these procedures.

If you're reviewing suggested edits and come across one of these, just consider it a gimme for your badge progress and move on.

11
Why is commenting everywhere restricted to those with enough reputation?
8
Improve filtering of spam suggested edits

0
Is there a way to send a hint to someone who suggest lots of edits?
8
Edit to correct a basic path syntax error in an answer rejected - why?
13
Gaming the review queue audits
4
Is an edit with assumption what the original author is using fine?
25
Should users suggest technical edits?
2
I'd like to ask a question about the lowest prices per TB storage service. Is this maybe something superuser should allow?
18
Should I perform a duck test when reviewing suggested edits?
8
How should I treat spam in the Low Quality Posts review queue
27
Strange audit result
8
Does this constitute a high quality question? From review audit